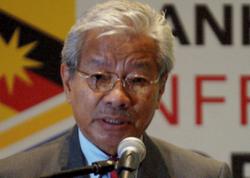 Nigel Unchat Jeremaiah, who scored 9As in last year's SPM examination, was participating in a group question-and-answer session in which the candidates were asked questions on Muslim prayers (rukun Solat) and the names of Muslim prophets, among others.

He was applying for a scholarship to study mechanical engineering at a Mara college.

Masing was upset over the line of questioning, saying it was wrong to ask questions on Islamic religious matters to non-Muslims.

"Nigel is pursuing a scholarship to become a mechanical engineer, not an ustaz. What is the relevance of these questions when applying for a higher learning scholarship?

"The Mara officers must understand that there are many natives in Sarawak and that Muslims are a minority here. What if the candidate can't answer the questions? Will he be disqualified?" he asked, adding that he did not want this incident to happen again in Sarawak.

Masing also said high achievers like Nigel should not have to apply to higher learning institutions but should be offered a place based on their results.

He noted that Nigel was unsuccessful in his application to Universiti Tenaga Nasional (Uniten) and was still waiting to hear from several public universities.

"With results like that he shouldn't be begging for a place. Our education institutions should identify him and offer him a place befitting his results if we are serious in harnessing our human resources," Masing said.

Meanwhile, Nigel said he had not expected Islamic-based questions to be posed at the interview, which took place last Saturday.

He said he could not answer the questions so he kept quiet.

"They asked me why I didn't answer so I told them I'm not a Muslim. Then they asked me what I thought about hudud," he told The Star.