The Obama double in Malaysia 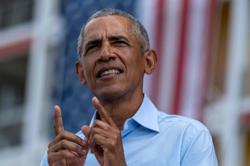 SUBANG JAYA: Iman Ishak, 25, is a lawyer who turns heads. His presence is distinct and noticeable. Around him people linger and whisper, until one day a man stood before him and bellowed “BARACK OBAMA!”.

Iman is a dead ringer for the US president.

A DJ-cum-lawyer, Iman has voiced a slight frustration over the stares he received, but found some of the overwhelming attention quirky and fun – especially from friends.

While he does not see the likeness, his friends have noted the uncanny resemblance in his smile, ears and general cool collected demeanor which are all comparable to the US president.

Iman recalled a time when his family visited London’s Madame Tussauds that featured a wax figure of Obama. Many visitors froze when he stood beside it, stunned by the eerie similarity.

“I always hear people whispering or giving me slight looks when I go around. I don’t pay too much attention to it but after a while you just play along with it. Sometimes, when I notice someone has been staring, I’ll just walk to them and say hey,” he said.

In one instance, popular hip hop group Wu-Tang Clan visited Malaysia and Iman was tasked with bringing them around Malaysia. After a few glances at a picture of Iman, member Raekwon yelled “Who is this Obama-looking dude?”.

Iman was made aware of the impending visit to Malaysia of his “identical twin” through friends and family members who suggested the possibility of meeting each other.

Iman, however, said he would not know what to say to Obama if they were to meet.