Jelutong residents grieving over loss of their famous son

GEORGE TOWN: The sudden death of Karpal Singh has left a big void not only in the lives of his family members, but also the residents of Jelutong, who had fondly given him the ­monicker “Tiger of Jelutong”.

Although Karpal, who defended his Jelutong seat for 21 years from 1978 to 1999, was known for his sharp and caustic comments of his opponents, be it in politics or in court, to the Jelutong residents he was a gentle, humble soul who was always there for them.

When news of his death spread, it could be said that besides Karpal’s family and his DAP comrades, the people of Jelutong – a working class area with narrow roads and mostly low and middle-class homes – were the most affected. Karpal, after all, was their most famous product.

Chee Kok Hwa, 44, said: “I had a headache when I heard the news of his passing. He was a brave politician who feared nothing, not even those in higher authority.”

He added that Karpal was not the type of politician who would only point his finger at the drains.

“He spoke of policies and of making them better for the people,” he said.

The fruit seller said that although he was relatively young when Karpal became Jelutong MP, he had heard much from the elders. 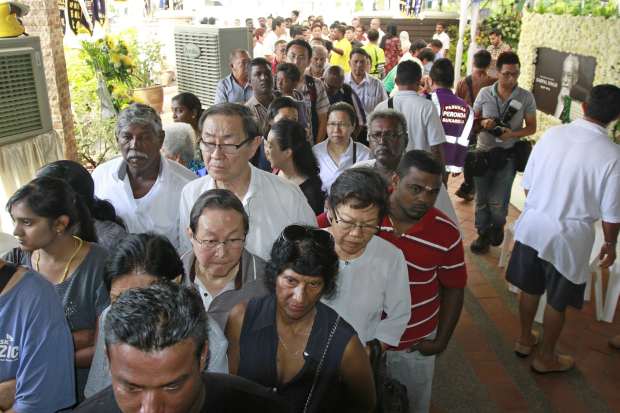 Long queqe: The crowd waiting to pay respects to Karpal at the funeral wake in Penang.

“I’m pretty sure the elderly people in Jelutong will miss him dearly,” he said.

A 68-year-old resident, who only wished to be known as Tan, said Karpal made Jelutong famous.

“Every Malaysian knew of Jelutong after he became MP, especially after people started calling him the Tiger of Jelutong.

“I’m just so sad that he died due to an accident, not because of old age,” he said, adding that Karpal was the first person the residents thought of contacting whenever they faced a problem in the constituency.

Abdul Rahim Y. Mohideen Pichai, 55, said he could not believe Karpal had left them for­ever.

“I feel bad. I will miss him very much. But what to do? This is his fate,” he said teary-eyed, adding that no matter what, people of Jelutong knew that Karpal had helped them through all the years he was MP there and had served them well.

“He was not called the Tiger of Jelutong for nothing,” he said.

Betty Soo, 52, whose family house in Jelutong Road stood for more than five generations, said: “Those of us whose home is in Jelutong truly remember how Karpal fought for us, ­sacrificing his own personal and family time to be a voice for the nation.”

She too shed tears as she stood beside the casket, looking down at his face for the very last time.

Another Jelutong resident, who wished to be known only as Cheah, 60, said Karpal’s spirit was laudable as he had insisted on travelling back to Penang at midnight to prepare for a court case the next morning.

“He put the interest of the people that he fought for above his own interests,” said the former hawker.

There are three state seats in the Jelutong parliamentary constituency – Sungai Pinang, Datuk Keramat and Batu Lancang – all held by DAP leaders.

It was once a cowboy town of sorts sandwiched between George Town and the rural outback of the rest of the island. Today, it has become a full-fledged township right next to the old George Town.

While other townships further away from the city centre like Bayan Baru have bloomed much faster, Jelutong somehow resisted the forces of change.

There is one change they will have to live with now – their Tiger is no more.

Karpal – for the true believers

A man who loved his country more