KOTA KINABALU: A police commando told the High Court here that they were ordered to shoot at armed intruders after a shootout between Malaysian security forces and Sulu gunmen in Kampung Tanduo Lahad Datu on March 1. 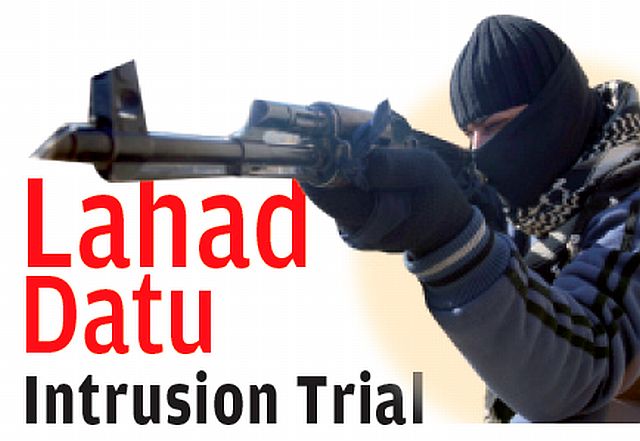 VAT 69 commando Sarjan Mohamed Sukri said prior to the shootout, they had been ordered to maintain high restraint.

Sukri, who is the 15th witness, testified during a cross examination by defence counsel Datuk N. Siva­nathan yesterday that the instruction was given by his superiors.

“We were not told to shoot unless shot at and to avoid any encounter with the intruders,” he said at the trial of 30 people charged with ­various offences linked to the Lahad Datu and Semporna incursions in February and March last year.

Sukri said this earlier order had stayed even during the ground surveillance which his team was instructed to carry out on the house the gunmen were believed to have occupied on March 1.

However, he said he had received a different instruction from his team leader Insp Sahar Omar during a “cutting-off” operation in Kampung Tanjung Batu on March 6 when he and his colleagues were ordered to shoot at several men armed with “parang” or “barong” (machetes).

Sivanathan: Why couldn’t you and your men shoot at their legs since they were carrying parang or barong?

Sukri: I do not know. Since Insp Sahar ordered tembak (shoot), every­one fired.

Sivanathan: When the order to shoot was given, as far as you are concerned, it is “shoot to kill”?

He said he only fired his gun once after the order was given, adding that they did not warn the armed men to surrender or put down their weapons since doing so would expose their location.

Sukri also said that he did not find anything during a “clearing up” operation in Kampung Tanduo on March 5 although his sector leader at that time, DSP Hakemal Hawari, had earlier told the court that there were about 10 to 20 bodies as well as weapons.

“I did not see anything, except for some kitchen knives and bullet casings in one of the many houses we inspected during the operation,” he said.

The trial, presided by Justice Stephen Chung at a hall in the state prison in Kepayan, continues today.