JOHOR BARU: With the world spotlight on the mysterious disappearance of Malaysian Airlines flight MH370, many cannot help but recollect the tragic airplane crash at Tanjung Kupang 37 years ago.

The crash occurred at a swamp at Kampung Ladang in Tanjung Kupang near Gelang Patah here at 8.36pm on Dec 4, 1977.

A total of 93 passengers and seven crew died in the tragedy, with remains of the victims buried at a grave known as the Tanjung Kupang memorial in Jalan Kebun Teh.

Retiree Ismail Ibrahim, 57, who travelled from Pontian to the memorial together with his four-year-old grandson Khairil Megat Zaidi, said the reports on MH370 reminded him of the Tanjung Kupang crash.

“I was about 19 then but I remember how everyone was torn by the tragedy and kept on talking about the shocking accident.

“In fact, it was so traumatic that I can still recall the name of the captain.

“I believe it was G.K. Ganjoor,” he said while pointing to the captain’s name on the list of victims that were carved on a commemorative monument at the memorial.

Ismail said he was there not only to pray for the crash victims but also for the MH370 passengers and their family members.

Ahmad Adham, 50, a resident who lives near the memorial, said that he decided to visit the memorial following the disappearance of MH370.

“I was only a child when the 1977 incident took place but the reaction is similar to the grief expressed by many for the MH370,” he said, adding that despite not knowing anyone on board the flight, he felt sad when reading of the incident.

“I just pray that the plane will be found soon so everyone can move on.”

Gardener Muhammad Awang, 62, said: “Sometimes I notice relatives dropping by with flowers or candles but these last few days visitors have been coming in to look at the names of the victims and say a prayer for them.” 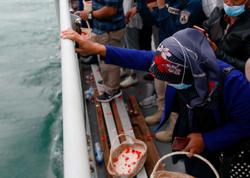