KUCHING: Sarawak-based Malay daily Utusan Sarawak clarified that the spelling error in a congratulatory message to former chief minister Tan Sri Abdul Taib Mahmud on his appointment as Governor was nothing more than “a typo error”.

“There’s nothing unusual about it other than an inadvertent typographical error,” affirmed its editorial consultant William Chan.

“It was an innocent human error with no hidden agenda whatsoever,” he added.

Chan said he was shocked to see the matter being “blown out of proportion” and turned into some kind of a “national issue”.

The paper ran a full-page advertisement by Parti Pesaka Bumiputera Bersatu (PBB), with the word “TAHNIAH” (Congratulations) being printed as “TAHINAH”.

According to Chan, the issue was not even discuss at their usual Tuesday management meeting chaired by Sarawak Press managing director Datuk Hanifah Hajar Taib-Alsree, who is Taib’s daughter.

“We only came to know that it was turned into a ‘national issue of sort’ when we saw it being played out by the online news portal,” he added.

Chan said Utusan had explained the error to Hanifah and she accepted the explanation.

Taib quit as Chief Minister of Sarawak after 33 years on Feb 28. He had also resigned as Balingian assemblyman to assume the post of Yang DiPertua Negeri on March 1. 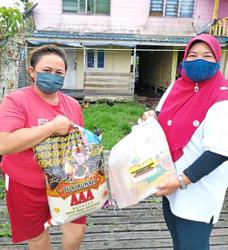