KOTA KINABALU: Sabah launched a crackdown on illegal trade and poaching of wildlife as some 160kg of protected Sambar and barking dears were seized from a tamu (weekly farmers' market) in Nabawan.

Three people were arrested and three others escaped as Sabah Wildlife Department (SWD) rangers swooped on the tamu on Wednesday following public tip-offs on open sale of slaughtered protected species in Nabawan about 200km from Kota Kinabalu. Some160kgs of suspected Sambar and barking dear meat sold at the Sabah's interior Nabawan tamu on Wednesday that was seized by wildlife rangers during a sting operations.

Sabah Tourism, Culture and Environment Minister Datuk Masidi Manjun ordered the department to go all out to address the issue of wildlife poaching and trading in the state.

"The war on illegal wildlife trade and poaching has just began, so hunters and poachers in Sabah be warned that there will be no compromise as we will be prosecuting and we will charge them to the highest extent of the law. Be ready to be jailed,” Masidi said.

SWD officer Benedict Jani said that a total of 145 kilograms of Sambar deer meat and 15 kilograms of Barking deer meat was confiscated as they were being sold without valid permits. 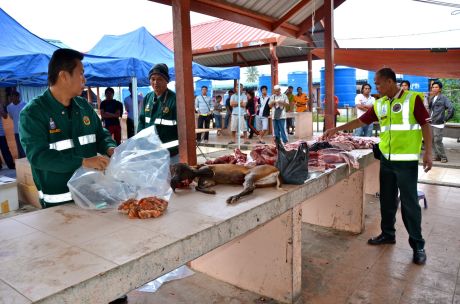 He said three other traders managed to escape after the first two were apprehended along with a third individual who resisted arrest and was preventing wildlife rangers from confiscating the bushmeat.

"Nabawan district has become a hotspot for the sale of illegal bushmeat in recent years due to the vast road networks all the way to Tawau and we will not be surprised if this bushmeat was illegally hunted in Maliau Basin or as far as some protected Forest Reserves in Tawau and Lahad Datu,” Jani said. 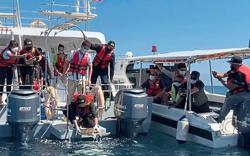