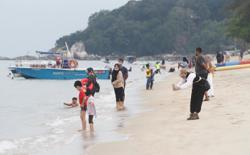 PORT DICKSON: A beach watersport operator’s idea of “fun” led to the death of a 30-month-old girl who was flung into the sea during a “banana boat” ride.

The girl and her father, along with several other passengers on the banana boat, fell into the sea after an alleged stunt by the craft operator off Pantai Purnama, near here.

Police are investigating if his reckless act led to the death of little Nur Hannan Humairah Mohd Hafrisham.

Port Dickson OCPD Supt Abd Wahab Harun said the toddler’s father, bank officer Mohd Hafrisham Ismail, 29, from Kuala Lumpur, had brought his wife and their three children to the popular beach at about 4pm on Sunday.

“The child pestered her father to take her on the banana boat ride and they joined seven others for the ride at about 6.30pm, while the mother and the two other children stayed on the beach.

“Since he was bringing along the child, the eldest of his children, the father had told the operator not to go too fast,” Supt Abd Wahab told a press conference here yesterday.

However, as the banana boat was returning back to the beach, the operator is said to have performed a stunt – purportedly to add some excitement at the end of the ride – which caused all on board to be flung into the sea.

Frantic holidaymakers helped Mohd Hafrisham carry his daughter to the beach, where the unconscious Nur Hannan was given mouth-to-mouth resuscitation.

The young victim, who had swallowed a large amount of water, regained consciousness within seconds and was rushed to the Port Dickson Hospital here at about 7pm.

However, doctors there decided to move her to the Tuanku Ja’far Hospital in Seremban when her condition deteriorated at around 11.40pm. She died due to internal injuries just before midnight.

Police have, for the time being, classified Nur Hannan’s case as sudden death. 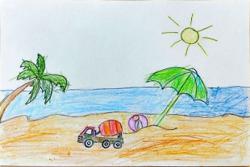