KAJANG: The family of Chong Kuan Fatt, 51, will assume guardianship of his orphaned son after he was accidentally shot dead by his father while they were trying to chase off a robber in Kampung Baru Balakong.

The victim’s uncle, who declined to be named, said Chong’s 12-year-old son would live with them in Balakong from now on.

The child’s mother reportedly passed away two years ago due to an illness.

The mood was somber yesterday as about 50 friends and relatives came to pay their last respects to Chong at the family house here.

Chong’s parents were visibly distraught as they saw off the procession to the Nilai Memorial Park where he was buried. 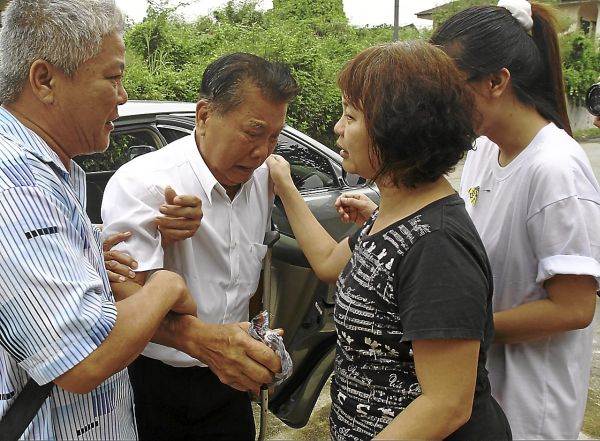 In mourning: Chong’s father (second from left) being consoled by family members at his son’s funeral.

His father had to be helped by relatives to the coffin while his mother burst in tears when the cortege was brought out of the house.

Chong, a pork seller, and his father, 76, had rushed out of their house on Wednesday night after hearing cries for help from their Myanmar worker, who was being robbed.

Chong was armed with a parang and ran ahead of his father, who was holding a pump gun. The man mistook his son for the robber and fired three shots.

One of the bullets struck Chong in the head, killing him instantly.

It is learnt that Chong’s father was licensed to carry a gun since 1967. He used the gun to fend off rodents from his orchard.

Meanwhile, Kajang OCPD Asst Comm Abdul Rashid Abdul Wahab said police considered the case closed but did not elaborate if they would pursue a case against the father.