GPS and its Islamic origins 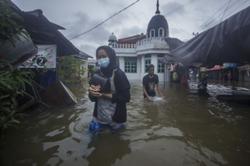 PETALING JAYA: Many of us are unaware that the Global Positioning System (GPS) we have all become accustomed to was created based on the discovery of a Muslim woman scholar.

Deputy Prime Minister Tan Sri Muhyiddin Yassin said many modern creations and great discoveries – including in the fields of engineering, green energy, mathematics, medicine and architecture – could be traced back to the days of Islamic civilisation where “it all began”.

“History shows that science and research was an important element in every civilisation. Whatever is created today will be important for future mankind.

“Therefore, we need to be relentless in our efforts to come up with new technologies and creations that will not only benefit us but our future generation,” he said when opening the 1001 Inventions: The Glorious Islamic Civilisation exhibition at the National Science Centre.

The Deputy Prime Minister also brought everyone’s attention to Abbas Ibnu Firnas, a Muslim inventor and aviator during the ninth century, who in his attempt to fly had created “wings” made of silk and eagles’ feathers, pointing out that this happened way before the Wright brothers “conquered the sky” in 1903.

Muhyiddin, who is also Education Minister, said the decline in interest in science was a global phenomenon which Malaysia is also experiencing, saying that according to a ministry report last year, student participation in science and technology saw a downward trend since 2006.

He said that in 2011, only 44% of secondary school students took up science and among the root cause was the negative perception that it would be difficult to pass the subject with flying colours and this could affect their chances to get a place in university.

“Among the shift needed to ensure the aim for Malaysia to be a high-income developed nation materialise is to strengthen the role of science and technology which is the driving force for progress,” he said, adding that the aim was to ensure adequate research scientists and engineers.