“The study will include independent experts agreed to by them as well as experts from Lafarge Group’s International Biodiversity Panel,” he said in a recent interview.

MNS president Prof Dr Maketab Mohamed had been one of those who voiced opposition to Lafarge’s plans to move its limestone quarrying activities to the southern portion of the hill, classified as areas C and D.

He had expressed worry that the karst ecosystem there would be affected, given that the hill had majestic caves and a rich variety of flora and fauna including the endemic trapdoor spider Liphistius Kanthan, which is critically endangered.

When contacted, Dr Maketab confirmed that he had recommended experts Liz Price and Dr Ruth Kiew to participate in Lafarge’s biodiversity study.

“We have stressed that areas C and D must be conserved as a unit due to the interactive nature of the ecosystem,” he said.

Dr Maketab had urged Lafarge to continue extracting limestone in areas A and B by moving its operations downwards through open cast quarrying, which involves accessing reserves below ground through digging, cutting or blasting.

Ruxton said that there was potential to do open cast quarrying there but could only be considered once areas A and B were fully developed.

“But we still won’t be able to do open cast quarrying until the upper limestone deposits are taken down to ground level,” he said.

Ruxton stressed that Lafarge had not ruled out any option until it received the results and recommendations of the biodiversity study, which is being headed by Universiti Malaya’s Biological Sciences Institute head Prof Dr Rosli Hashim.

The team’s findings, expected to be completed in December, will be presented to Lafarge’s international panel, which in­­cludes independent representatives from WWF-International, IUCN France and the Wildlife Habitat Council.

“We want to see first what the biodiversity issues are. Then we will work on a biodiversity management plan that is in agreement with not just Lafarge, but MNS and WWF-Malaysia,” he said. 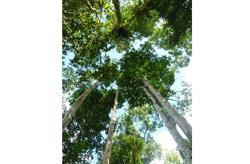