Former Kedah MB Azizan a figure both liked and respected

PETALING JAYA: There was a great deal of sadness from both sides of the political divide in Kedah when news broke that former Mentri Besar Tan Sri Azizan Abdul Razak (pic) had passed away. 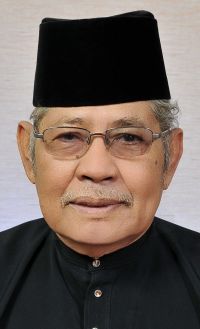 The PAS leader had not been able to leave his hospital bed ever since he was admitted for treatment on May 6, several hours after Kedah fell to the Barisan Nasional in the general election.

His health path had been like a roller coaster with lots of ups and downs as a result of a plethora of health issues that were complicated by his diabetic history.

Early on Wednesday morning, things took a turn for the worst when he reportedly suffered another heart attack.

A number of VIPs, including the Regent of Kedah, had rushed to his bedside that evening.

“The last time I saw him conscious and sitting up was about 10 days ago. Puan Sri (Faeqah Sheikh Hamzah) was feeding him some soupy broth. I visited him a few times after that but he was often asleep or too tired to talk,” said Anak Bukit assemblyman Datuk Amiruddin Hamzah, who choked up several times when talking about his former boss.

Some said Azizan lost the will to go on after Kedah fell.

On the contrary, he had persisted in holding the fort through the election campaign although his health was fast deteriorating.

Amiruddin, who was at Azizan’s house a day before the general election, had noticed that the tip of one of Azizan’s toes had turned black.

He was admitted to hospital at about 3am, the night after the election results.

A few days later, doctors amputated both his legs from the knee up.

The general opinion has been that Azizan should not have put politics above his health but, as the Muslims put it so beautifully, it is God’s will.

Besides, anyone acquainted with Azizan would know that no one could compel him to do what he did not want to.

The man whom everyone in PAS knew simply as “Ustaz Azizan” was a different kind of creature from the mono-dimensional types that dominate PAS.

He had a strong and interesting personality, spoke good English and had that classic Kedah sense of humour.

His educational background and experience as a former university lecturer also made him a well-rounded person.

He is probably the only PAS leader who had ever worked part-time in a KFC outlet when studying for his Masters degree.

Kedah is not like Kelantan and Azizan struggled in administrating the state.

He also had to fend off several internal attempts to topple him.

He showed wisdom and patience in tackling the unique politics of Kedah and refused to play the accuse-and-blame game.

He was open to views from Umno figures from Kedah like Tun Dr Mahathir Mohamad and Tun Daim Zainuddin.

He once said during an interview that he could not possibly ignore someone like Dr Mahathir who had turned Langkawi from a sleepy fishing village to a top tourism destination.

One of the reasons why Kedahans did not judge him harshly despite his administration’s inability to deliver was that he was humble and approachable.

He had two wives and 14 children and his lifestyle stayed simple even after he became MB.

He once told this reporter: “I heard you went to check out my house. You thought I lived in a palace?”

Both his first and second wives’ homes were just like that of the average family in Kedah, something that Umno politicians could take a leaf from.

Not everyone in PAS agreed with his political style but, as they said, Azizan will be Azizan.

He also had a macho swagger about him and more than a few people had said that Umno would have been in deep trouble had Azizan been a healthier and younger man when PAS won Kedah.

A Kedah reporter who had sobbed when she learnt of his death said: “He was a fatherly figure. You could ask him anything, nothing was off-limits.”

He had a way of telling off reporters if he did not like their questions – he used a combination of reprimand and what the Malays know as perli or subtle put-down.

He made them laugh, he could be utterly charming and he could also scold but he did not hold grudges.

By-election in Sungai Limau to be held by Nov 27