PETALING JAYA: Thieves who rob automated teller machines will be left with worthless pieces of paper if a Bank Negara proposal is put into place. Dye bombs are to be placed in the ATMs and if anyone tampers with the machines, the “bomb” goes off, leaving the notes stained in red and easily recognisable as stolen money.

Bank Negara, in its guidelines on Dye-Stained Banknotes dated Aug 26, is calling on both banks and Cash in Transit Companies to consider using the currency protection device (CPD) to deter ATM theft.

Its technical director Mohd Zaki Sulaiman said that once installed, the dye pack would be triggered when someone tries to break into the ATM. 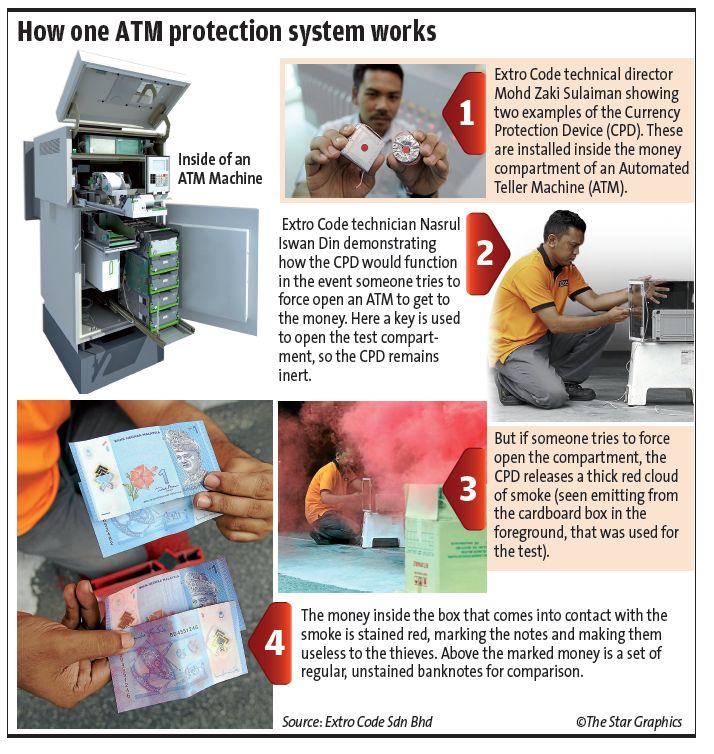 “The device is like a smoke bomb which releases the ink onto the stacks of banknotes in the ATM,” he said.

Mohd Zaki said there’s no actual explosion but there is some heat when the CPD is triggered.

“The actual triggering mechanism is a trade secret,” he added.

He said the ink called Disperse Red 9 was not harmful.

He said the ink was imported but the actual CPD was developed and produced locally.

Mohd Zaki declined to reveal the cost of each dye pack and the installation cost.

“Who pays for the device will depend on Bank Negara and the banks,” he said.

He said there are four ATM providers in the country but installing the dye-packs in the different machines should not be a problem.

The Bank Negara guidelines state that the CPD would emit a bright coloured dye by smoke, liquid or any other agent to stain the currency in the event ATMs are broken into.

This will enable authorities and the public to easily identify the defaced stolen currency and render them unfit for use.

The guidelines also sets out conditions under which these banknotes will be replaced.

> The ink has to be indelible by water, fuel, gas, bleach and detergent.

> It must be traceable to the ATM, to assist police investigations.

> It can be detected and rejected by banknotes authentication machines used by banks such as Cash Deposit Machines.

> It must be non-hazardous and non-toxic.

If banks retrieved the dye-stained currency, they can submit the banknotes to the central bank for assessment.

Tellers will also be trained to detect these banknotes.

The public and retailers will be advised not to accept dye-stained banknotes as they are likely to be stolen.

In the United States, banks have dye bombs in vaults and any unauthorised person who tries to remove any money will trigger the bomb, leaving all the money – and the robber – stained in ink.

9000 machines nationwide to have CPD