KUALA LUMPUR: A former senior police officer told the Sessions Court here Friday he did not know that he was referred to as the deputy public prosecutor (DPP) in the case involving the National Feedlot Corporation (NFC).

Datuk Ahmad Damanhuri Mohd Yusoff, 63, said he only knew it on the day of the hearing of businessman Datuk Shamsubahrin Ismail, who is facing 17 charges under Section 4(1)(a) of the Anti-Money Laundering and Anti-Terrorism Financing Act 2001 involving RM1.755mil.

He said he was informed about it by the head of the prosecution unit of the Malaysian Anti-Corruption Commission, Datuk Abdul Razak Musa, from a short-messaging service (SMS) sent by Shamsubahrin to former NFC director Datuk Seri Mohamad Salleh Ismail and former NFC finance manager Hashimah Ahmad.

Ahmad Damanhuri, who is the 18th prosecution witness, told the court that he was not a DPP as claimed by Shamsubahrin, but that he used to deal with the DPP.

"At a meeting chaired by Datuk Salleh, I told him (Datuk Salleh) that I interact and work closely with the DPP, but I am not a DPP," he said.

Ahmad Damanhuri, who was previously head of the examination division of the Police Training Centre (Pulapol), said he also informed Salleh that he was a former senior police officer and of his experience in handling the Al-Maunah case.

Earlier, Hashimah, who is the 17th prosecution witness, said she was not envious of Shamsubahrin, but was not happy with the service he gave to NFC.

"Payment has been made to him (Shamsubahrin), but the result cannot be seen. When he sent SMS requesting for documents, I handed the documents, but there was still no result," she added.

The hearing before judge Rozilah Salleh continues on Jan 14. - Bernama 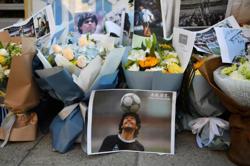