Report by PSC on Electoral Reform passed in Parliament (Update)

KUALA LUMPUR: The report by the Parliamentary Select Committee on Electoral Reform was passed in Parliament on Tuesday.

Speaker Tan Sri Pandikan Amin Mulia invoked Standing Order 86 (5) to put the PSC report to vote following continuous protests from Opposition MPs who refused to debate it when they were invited to do so.

The nine-member PSC - five from Barisan Nasional, three from the Opposition and one Independent MP - started work on the report on Oct 2 last year.

The recommendations and suggestions were obtained from public hearing sessions, feedback from committee members, summarisation of results of re-scrutinisings by the sub-committee, and observations from on-work visits carried out.

The committee met 13 times since October until March 28 this year besides setting up five sub-committees headed by PSC members to refine issues arising out of the public hearings held in Kuala Lumpur, Kota Kinabalu, Kuching, Penang, Kota Baru and Johor Baru between last November and January this year.

From the public hearings, a total of 106 associations, registered organisations and individuals put forward their views and suggestions before the committee.

The following are among the recommendations and suggestions made by the committee:

- The Election Commission (EC) should work towards automatically registering citizens who turn 21 as voters.

- EC should allow Malaysians aged 20 to pre-register as voter.

- Parliament to be dissolved only after its fourth year in session.

- Establishment of caretaker government to run the country until the formation of a new government.

- All campaigning parties contesting in elections to get fair and free access to the media.

- EC should study other methods to receive ballot papers via post from Malaysian embassies/missions worldwide directly to its headquarters for counting and other purposes.

- EC to allow media personnel the right to postal voting.

- EC should be empowered to cross out any voter's name from the main electoral roll or move them to different constituencies if public complaints against the voters have been proven.

- Political parties should advise voters who have moved, to change the address on their identification cards at the National Registration Department before registering as new voters or applying to change their polling stations.

- The EC should examine the system practised in other countries which enables voters to choose between their permanent address (hometown or place of birth) or place of employment as their voting address.

- Enforce existing rules on those who provide false information when registering as voters.

- Another enforcement sub-committee under the EC should be created to enforce all the regulations without having to depend on other authorities.

- EC should consider improving the current First-Past-The-Post system (simple majority system) or study other forms of electoral systems such as the Proportionate Representation System.

- The process of appointing the EC chairman, deputy chairman and members should be conducted like how Federal Court, Court of Appeal and High Court judges are chosen. At present, such judges are appointed by the Yang di-Pertuan Agong on the advice of the Prime Minister. This is to dispel the perception that the EC is not independent.

- The EC be given the power to have its own budget and be directly responsible to Parliament to ensure that its objectiveness is not questioned.

- A service commission be set up for the EC to appoint its own officers.

- The EC be restructured to ensure that the enforcement of election laws be carried out by EC enforcement officers to reduce the dependency on other parties.

- The Government adds human resource and allocations for the formation of an Election Academy to effectively educate all parties including citizens on their right to vote. An advisory board, to consist of representatives from political parties and non-governmental organisations, should be set up to assist the Election Academy.

- As a long-term measure, the EC's three responsibilities - to conduct elections, manage the electoral roll and review election constituencies - should each be handled by three independent bodies.

- The EC should come up with a fair formula based on a fixed principle in determining the number of voters in a constituency, to ensure that there are no huge disparities among other areas in the state.

- EC to display the list of doubtful voters within 45 days after the report is tabled which has more than 50 voters within one address in order for the EC to remove and update the electoral rolls. 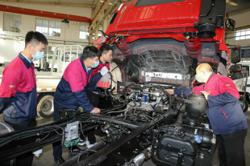