D-G: No plans to close down 437 private haemodialysis centres

He said the service provided by the centres was much needed as there were only 181 public haemodialysis centres.

Dr Hasan said the non-government centres were safe if they complied with the minimum criteria set by the ministry and obtained their operating licences.

“Even if they can't comply by getting the necessary training for their doctors, nurses and medical assistants, we will still work out a timeframe for them to relocate their patients,” he said yesterday.

It was reported that five Health Ministry officials visited the Pertubuhan Hemodialysis Seberang Perai Selatan in Simpang Ampat, Nibong Tebal, and ordered it to shut down by May 1 as it did not have a full-time nephrologist.

Dr Hasan said the non-government centres were necessary to help haemodialysis patients and were given RM113mil in capital grants and dialysis treatment and medication subsidies between 2006 and 2010.

Dr Hasan said ministry officers had been sent to meet all 168 centres to check on their status and help them get their licences to avoid any centre from being closed.

“The ministry wants all parties to provide quality, effective and safe haemodialysis treatment and services,” he said.

Dr Hasan said several concessions had been granted to existing premises, including giving them reasonable time to complete training for their doctors and staff members and ensure the safety of their infrastructure.

He added that the Government was providing a four-month course for nurses and medical assistants to upgrade their skills in handling haemodialysis machines and pati-ents. 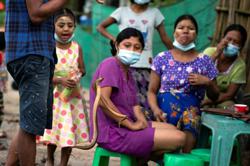