The perception may be justified as the TV personality’s former husband kept his distance from the press, looking serious and avoiding eye contact with journalists.

It was the opposite image for Darren Choy Khin Ming, the man Chong accused of enticing his wife even though he knew that she was married. He blamed Choy of wanting to have sex with her then. Arguably, most journalists were with Team Darren. He is handsome and has a ready smile.

So, it came as a surprise when on the day Choy was acquitted of the charge, Chong agreed to an interview. (Choy had apologised openly in court to Chong for having embarrassed him over the affair). Apparently, the businessman’s lawyers had given him specific instructions not to comment on the case.

And, at the interview on Monday, the 33-year-old, six-footer came across as a “gentle giant”.

Here are excerpts from that interview.

What is the public’s perception of you?

It was just like when they found out about my affair (with Serena, a GRO in China). I admitted to Daphne, I said sorry to her and I put everything behind me and tried to make my marriage work. I resigned from my job in China and returned to Malaysia. But by then, she had found someone else.

What’s next for you?

Next will be to concentrate on my renewable energy business in Zhejiang province, south of China. It is good that I don’t have to come back for the trial. For the past six months, I have been coming back to Kuala Lumpur every single month. And it is quite expensive to fly back to Kuala Lumpur and it is tough not being able to be in the office to manage the corporation.

How was your experience wooing a celebrity?

To be honest when I was introduced to her (at Hilton’s Zeta Bar in 2005) I did not know she was a celeb. I wasn’t very familiar with the Malaysian entertainment industry. All I knew at that time was Sheila Majid. I was an accountant who only knew about Hong Kong and Hollywood gossip. A few days later my friends told me “‘you know she is in FHM (a men’s magazine), a celebrity and a model’’ and I googled her.

How’s your relationship with your ex-wife?

When I initiated the enticement case, she called me and apologised. At that time we were okay. And I was very concerned about her and the baby. I love the baby to bits. When the baby was born I was at home most of the time as she had to work and I work (trading) from home.

We have not spoken for a long time. The last time I saw Daphne was when we stood in front of the judge at divorce court in December last year or January this year. After the judge granted our divorce we caught up for a while. And she asked about my family and I asked her about hers. We wished each other the best.

She is really a good friend and she is a very nice person. It is just that she did something that is not good for the marriage.

How did you discover that Isobel Daniella Iking is not your daughter?

I found out through reading emails (67 pages) between Daphne and Darren. In some of the emails there were mentions about the identity of the baby’s father. Darren wrote “it is mine”. And Daphne wrote “don’t tell my friends that it might be yours”. So I got suspicious and I took the baby to a pathologist without Daphne’s knowledge and did a DNA test on her.

That is the point when I said “enough is enough”. Before that I saw them (Daphne and Darren) in KLIA coming back from a holiday. Of course they denied it. And knowing Daphne, I said to her: “I will trust you because you are my wife. Even if there was an affair, I would forget about it and let’s move on”.

I thought everything was okay until I found out about the baby. But it took me a long time to decide whether to divorce her.

(At that time) the baby was about nine months old. I told myself I’d rather do it (divorce Daphne) now than regret (not divorcing) when she (Isobel) is 10 years old or 20 years old, knowing fully well that she is not my daughter.

I made a decision that I’m going to break the news and hope the best for Daphne and I can move on. I did not want to regret the decision to stick to the marriage.

How did you feel when you discovered that Isobel was not your kid?

I cried for days after finding out her DNA was not mine. It was tough. I got the results in August 2008 – at the time when we were trying to decide whether we wanted to carry on with the marriage.

At that time, I could not let Daphne know that I knew the child was not mine. And I had to come home every night and look at the child and think: “Do I leave you? Do I not leave you?” It was a very tough two months.

I only sent Daphne a letter (asking for a divorce) in October 2008. Even before I gave her the letter I was worried that she would be upset – that she would do something to herself or the baby.

When I decided to give her the letter, I was glad that Michele (Daphne’s sister) was in our house. I passed the letter and Daphne moved out. 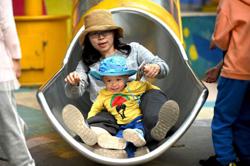