KUALA LUMPUR: Corporate figure Darren Choy Khin Ming, 46, was acquitted Monday of enticing TV personality Daphne Iking, after he agreed to apologise to her ex-husband for causing him embarrassment over the affair. In the apology read out in court by Choy's lawyer Datuk Jagjit Singh, Choy acknowledged that his relationship with Iking, 33, has caused humiliation to businessman Ryan Chong Yiing Yih, 33, his parents, siblings and relatives.

Choy also stated that he was not the biological father of Iking's three-year-old daughter Isobel Daniella Iking-Chong.

He expressed his regret that the issues raised in cross-examination by his counsels may have tarnished and sullied the reputation, character and image of Chong and his family.

He retracted several allegations brought up during cross-examination, where Chong allegedly promised Iking money when she agreed marry him and that Chong was promised an RM8mil inheritance by his late grandfather.

Magistrate Engku Ahmad Rashdi Engku Abdillah then ordered the discharge and acquittal after Chong's lawyer Wong Kian Kheong applied to drop the charge, in compliance with Section 254 of the Criminal Procedure Code, following the apology.

"This is the kind of settlement that the court has always hoped for before any trial takes place. The court is satisfied that a settlement is agreed upon. The accused is hereby discharged and acquitted," said Engku Ahmad Rashdi.

Choy was accused of enticing Iking, knowing that she was a married woman, with the intention of having sexual intercourse.

He allegedly committed the offence at a condominium unit in Taman Tun Dr Ismail here between July 2007 and September 2009. 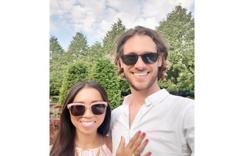 TV review: Cursed may vex you with its uneven calibre