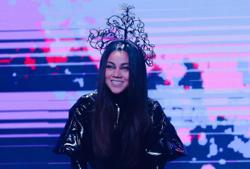 The song, which was sung by Aizat Amdan and composed by Pete Teo with lyrics by Amran Omar, won them the main trophy and RM35,000 in a hard-fought competition held at the Putra Stadium in Bukit Jalil.

First runner-up was the song Dan Sebenarnya, composed by new singer-songwriter Yuna, who took home RM15,000 and a trophy for her effort.

Newcomer Black, whose real name is Hanafi Hanafiah, bagged the Best Vocals trophy and RM10,000 for his rendition of Aku Rindu Sayang Kamu.

The guest-of-honour at the crowd-pleasing event was Information, Communications, Culture and Arts Minister Datuk Seri Dr Rais Yatim, who later gave away the prizes.

The event, which was hosted by celebrities Cheryl Samad, Ally Iskandar and Faizal Ismail, was broadcast live on TV3 from 9pm.