PETALING JAYA: The Government is only “studying and looking into” the building of the LCCTeast@Labu airport, Deputy Prime Minister Datuk Seri Najib Tun Razak said.

He clarified yesterday that the Cabinet had yet to make a formal decision on the matter.

“We are studying the matter from all angles, to verify whether we should go ahead or if there could be a different arrangement,” he told reporters at the Sultan Abdul Aziz Shah airport yesterday after witnessing the handover of the Amphibious Bombardier CL415 aircraft to the Malaysian Maritime Enforcement Agency (MMEA).

It is the first such aircraft to be used in Southeast Asia.

It was earlier reported that the Cabinet had approved the privately financed project on a 2,800ha site in Labu.

The project was to be fully financed by government-linked conglomerate Sime Darby and its partners, which include budget airline AirAsia Bhd and Malaysia Airports Bhd.

However, the plan has drawn flak from many quarters including Khazanah Nasional which questioned the need to have two airports within 10km of each other.

If the Government gives its approval for the project, the new LCCT is expected to be ready by March 2011.

At a separate function earlier, Najib said that details of liberalisation in the services sector would be out soon.

“I am having a meeting with the services sector. It’s been scheduled fairly soon. After that I’ll come out with a full statement on what the Government can agree to, but the principle is that there will be liberalisation of the services sector,” he said after speaking at the Malaysia Industrialised Building System (IBS) Exhibition.

The deputy prime minister said the Government would take cognisance of what other countries were doing so that the country would remain competitive.

Najib described the construction industry as a very important sector as it had a multiplier effect on the overall national economy.

According to the Construction Industry Development Board (CIDB) Malaysia, as of Jan 8, there were about 303 government projects nationwide worth RM9.2bil to be implemented using the IBS. 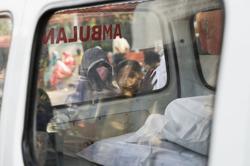