Fresh mozzarella, made in Malaysia

LANGKAWI: Say mozzarella, and a delicious, stringy cheese comes to mind. Its original home was Italy, although today it might be Australia, where most of our imported dairy comes from.

Most of us pay handsomely to enjoy this popular cheese that sustains most pizza businesses in the country, understandably so, as it is only available imported. 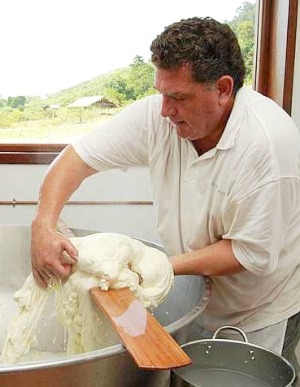 Until now. Fresh handmade mozzarella is being produced in our country as we speak, in a small shop in Langkawi.

Not only is it produced from the milk of water buffaloes, it is also handmade, the two hallmarks of delicious and authentic mozzarella.

But not many know of the existence of the shop on Friendly Farms, which since it opened some four months ago, only sold halal and organic meat. The mozzarella business only started about three weeks ago.

The owner is Norzana Ghazali, a 25-year-old businesswoman married to Michael Bruschi, an Italian businessman with experience in cheesemaking.

Norzana, or Yana as she likes to be called, said that many were initially sceptical of her mozzarella business.

“Many didn’t think it was possible, if not, somebody would have done it a long time ago. 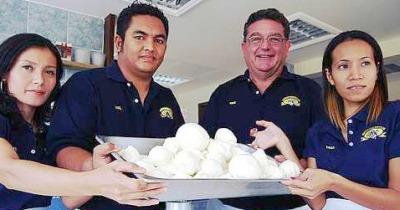 “But as you can see, it’s happened, we have succeeded in producing handmade mozzarella and we’re sold out everyday, so it is possible”, she said.

Mozzarella-making was only experimental at first, but months of failing only fuelled their desire to try harder, said Bruschi, 53.

The farm’s mozzarella is much better than even those from Italy, he claimed.

“Taste it,” he said simply.

Responding to the taste challenge, seasoned chefs from top hotels in Langkawi who had tasted the real thing and were able to tell the difference, were called in.

They had been using imported handmade mozzarella but raved about Friendly Farms’ mozzarella.

“They simply could not believe it was possible to produce such good mozzarella from the milk of our own buffaloes, and since then the demand has been almost non-stop,” Bruschi said.

Former prime minister Tun Dr Mahathir Mohamad was among those who had tasted their fresh mozzarella and have attested to its delicious taste in his blog, www.chedet.com.

Bruschi explained that those in the market were not mozzarella, but fior di latte, which was made from cow’s milk.

They are more affordable to consumers and cheaper to produce and widely used in the food industry, especially in pizza parlours.

He said the mozzarella made on Friendly Farms use vegetable rennet to help with the coagulation of milk.

However, Bruschi said vegetable rennet was quite sensitive to work with, so many cheesemakers preferred to use calf rennet, which is obtained from the inner lining of the calf’s fourth stomach.

If the calf was not slaughtered according to Islamic rites, than the rennet would not be halal, thus making the mozzarella non-halal.

So next month, a Department of Islamic Development Malaysia (Jakim) licensed slaughterer would be called over to the farm to slaughter a calf so that rennet can be extracted.

The cows are mostly of local breed, fed on organic feed and slaughtered by two Jakim-appointed slaughterers.

Bruschi says hotels make up the bulk of the orders, but the chefs and their diners alike have a hard time believing the meat are from local cows.

“Malaysian meat has the best flavour, better than those from Australia and New Zealand. You just have to know how to cut it. Do it right and you’ll get optimum tenderness.”

Ismail Morad, 27, from Langkawi is the farm’s San Marino-trained butcher.

He said that prior to being slaughtered, the cows are placed in an air-conditioned room with painted “bushes” on the wall and “clouds” on the ceiling.

The cows are given enough hay on the floor and kept comfortable.

“When the cow is nervous or tense, this can affect the quality of the meat”, Ismail explained.

The shop is tucked far along a narrow road inside Kampung Nyior Cabang. Even so, foreign tourists found their way to the shop almost daily, simply for the mozzarella and the professionally cut meat.

Aside from hotels, Friendly Farms mozzarella is also at the top of the shopping list for the expatriates living in Langkawi, including those who live on the million-dollar yachts docked at Telaga Harbour.

Yana said since they first succeeded in making the cheese, the orders have not stopped.

“We’re not even producing consistent amounts because of the erratic milk supply,” she said.

The fresh handmade mozzarella are selling below the market price at RM120 a kilo, and the farm is selling an average of 10 kilos a day.

Yana said many appreciated the fact that the mozzarella was not machine-made like those on the market, which resulted in less edible parts and poorer flavour.

“The main problem is getting the milk. Making it halal is no problem. But to make good handmade mozzarella, we need at least 200 litres of milk. But it is hard to get that much buffalo milk, so we also make fior di latte.

He said Malaysian farmers stand to make almost RM20,000 a month just by selling milk, if they knew how.

Bruschi said he did not mind providing free training to these farmers and guaranteeing sale of their milk.

He said good cheese also came from good milk, and that depended on the cows’ diet. A cow fed with the right amount of fat, carbohydrate and minerals would produce unique tasting cheese.

Bruschi said Friendly Farms planned to go into making 15 other types of cheeses by 2009.

He said, every year, consumers spend so much on dairy products, including cheeses which were not even common ingredients in local cooking.

“But somebody’s been buying them ... so there is a huge demand. It’s time to become self-sufficient”, he said. — Bernama