Muslims with HIV should not marry

IPOH: Muslim couples should not marry if one or both of them are HIV-positive, said Perak Mentri Besar Datuk Seri Mohammad Nizar Jamaluddin.

He said it would be unfair to themselves and to their child if they decide to have one.

“I think it is a gross error to allow somebody very sick like that, an HIV carrier, to marry.

“It would be even worse if both are HIV-positive. You would be passing the disease to the embryo. This is unjust,” he told reporters after meeting mosque officials here yesterday.

Nizar added that a person with HIV would find it difficult to lead a normal life because they would be beset by psychological and emotional problems.

On Thursday, Deputy Prime Minister Datuk Seri Najib Tun Razak said Muslims planning to marry would have to undergo mandatory HIV screening from next year due to the rising rate of HIV infection among Malay–sian women.

On another issue, Nizar questioned the need for a proposed National Disaster Emergency Act that would allow the Federal Government to take charge whenever there was a disaster.

He said he welcomed such legislation as the state needed federal assistance but not if it gave the Federal Government the power to take over a state.

He pointed out that in PAS-led Kelantan, the federal and state agencies were able to work together to overcome emergencies over the past 18 years.

He was commenting on Minister in the Prime Minister’s Department Datuk Seri Mohamed Nazri Abdul Aziz’s statement that the Government might introduce the Act to enable swift and effective response during disasters, especially in Opposition-held states.

Nazri cited the Bukit Antara–bangsa landslide tragedy as an example. 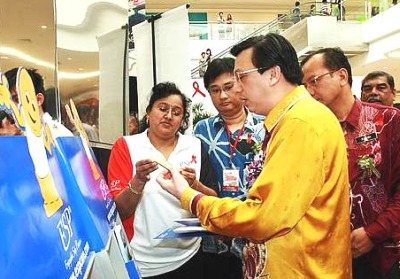 He said the ministry was setting up a committee to look into ways to prevent more women from being infected.

He encouraged non-Muslim couple to go for pre-marital screenings even though it was not compulsory.

“One can go for a full check-up and get the HIV screening as well,” he said at an HIV awareness campaign and healthy lifestyle programme yesterday.

Other News and Views:Wedding plans go bust after HIV screening