Businessman Tan Sri Tee Hock Seng, who is the Cheras MCA division chief, has been made the treasurer-general. 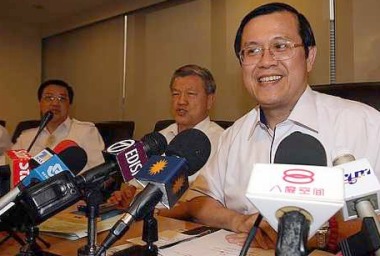 New line-up: Ong announcing the appointment after chairing the firstcentral committee meeting Tuesday since being elected as partypresident.

He also unveiled the line-up of the new state liaison chiefs, in which Ong is now the Johor party head.

His deputy Datuk Seri Dr Chua Soi Lek was not given any state appointment but was made the head of the Government Policy Monitoring Bureau to ensure the party was sensitive to public feedback.

Ka Chuan, who lost in his bid for the deputy president’s post to Dr Chua, has been appointed Party History and Documentation Bureau chief.

Youth vice-chairman Wyman Yoo Wei How, 35, has been appointed the national organising secretary, taking over from Datuk Hon Choon Kim.

Besides Ka Chuan, Datuk Chor Chee Heung is the only other person who had lost in the party elections to be appointed to a position. Chor has been appointed a central committee member.

At the press conference, when asked why Wong was appointed secretary-general, Ong said he did not need to reveal the reason.

He added that no reason should be given and the decision was made to best serve the party.

When asked why Dr Chua, who is from Johor, was not appointed to lead any state, Ong replied: “All the appointments are the president’s prerogative under the party constitution. You have to look through the list. Do not make any judgment just by looking at the small part.”

On the MCA’s Cabinet posts, Ong said the meeting only discussed party matters.