GEORGE TOWN: The Penang Government will proceed with its plan to put up street names and road signs in multiple languages unless it is proven that the move is against the law.

“Let no one doubt that the DAP respects and upholds Bahasa Malaysia as the country’s official language. We even amended our party constitution in 2006 to reflect the language’s official status,” he told a press conference yesterday after opening the DAP state convention.

“We are not taking anything away so I don’t see what the problem is.”

Lim, who is also the DAP secretary-general said large nations like China also had other languages on their road signs. 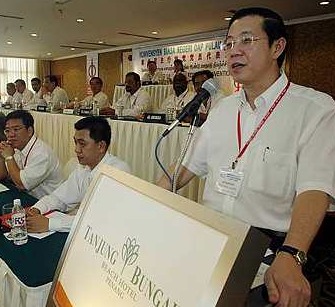 ”We cannot be a ‘closed society’ if we want to survive and compete globally,” he said.

He had said the ministry would send a letter of protest against the plan as road signs in multi-languages have no benefit and would disunite the people.

It was earlier reported that additional road signs in other languages would be added to the original Bahasa Malaysia signs at the heritage enclave here by December.

Commenting on allegations by Barisan Nasional leaders that his recent trip to South Korea was a waste of taxpayers’ money, Lim said a press conference would be held soon to address the issue.

“In Penang, we are clear about our objectives. We are taking pro-active steps to counter the effects of the global economic crisis by attracting new investments to the state,” he added.