KUALA LUMPUR: Four Indonesian armed robbers were shot dead when they tried to attack several policemen with parang and sickles near a construction site in Kajang.

The four, aged between 30 and 40, had hours earlier robbed and assaulted businessman Lee Yan Lin, 39, at his home at Bukit Permai, Ampang.

”Police requested for backup and surrounded the hideout at about 5.30am.

“Our men identified themselves and ordered Indonesians to surrender. Instead, they charged towards the police with parang and sickles, forcing the cops to open fire,” he said. 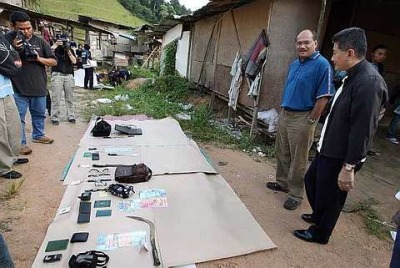 Rogue den: Some of the weapons and items recovered from the fourdead robbers on display at the squatter area where they were killed inBukit Hatamas

Recounting his confrontation with the robbers, Lee said four men armed with parang entered his room at 3.50am and tied his hands with a necktie.

“Unhappy that I only had RM100, the gang leader slapped me and hurled abuses at me before dragging me from room to room to find more valuables,” he said.

He said they then grabbed a cooking gas cylinder and forced open a room door.

“My mother who lives next door and heard the commotion came over to see what was happening. On seeing her, the robbers fled,” he said.

DCP Khalid said investigations revealed that two of those killed yesterday were among a group of robbers who charged at police with a parang and sickle in Serendah on Tuesday. Two men were shot dead in that encounter and three others held.

“The group is believed to be involved in at least 19 break-ins in Selangor, Malacca and Negri Sembilan.

“We are still on the lookout for at least 10 remaining members of the group,” DCP Khalid said.