PUTRAJAYA: Just a day after Datuk Seri Anwar Ibrahim won the Permatang Pauh Parliamentary seat, Tun Dr Mahathir Mohamad fired his first salvo at him by claiming the PKR adviser could “convince even the devil to follow him”. 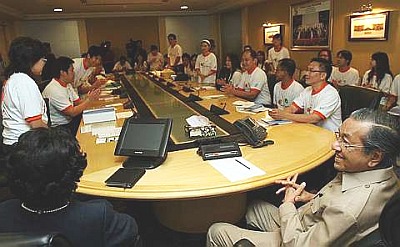 Reaching out: Dr Mahathir and his wife Tun Dr Siti Hasmah Ali entertaining a youth group from the Presbyterian Church of seven countries at the Perdana Leadership Foundation in Putrajaya yesterday.

“I don’t think Abdullah is a match for Anwar. He is going to raise all kinds of issues and questions and will demand and pressure the Prime Minister for answers. It is going to be a tough time for Barisan,” he said.

Dr Mahathir, however, felt that Anwar would not get 30 MPs to switch sides to form the government. He said the PKR adviser might think he could “buy” the MPs but it would be impossible for him to “outbid the other bidders who have more money.”

“The Permatang Pauh by-election results is a clear message for Barisan Nasional, Umno and its leaders. Within five months after the March 8 polls, Barisan lost the seat again, with a bigger majority than the last time.

“I believe this will be the trend at other places as well,” he saidwhen met at his office yesterday.

He said Abdullah, his deputy Datuk Seri Najib Tun Razak and other leaders should not close their “ears and eyes” to the people’s message and should not blame the Permatang Pauh defeat on sabotage or other elements.

“If changes are made two years from now, then Umno will face an uphill task to gain strength and the people’s confidence. If they fail to change, then Barisan can expect defeat in the 13th general election,” he said, adding he was willing to come back to the party if Abdullah stepped down before the scheduled handover to Najib in 2010.

He said Umno should be concerned that the party was losing popularity and appeal and even the DAP had become more appealing to the Malays, referring to former Transparency International Malaysia chairman Tunku Aziz Tunku Ibrahim joining the DAP.