KUALA LUMPUR: The nation turns 51 this year, and memories of Merdeka will be etched in the minds of many as the years go by.

For Michael Wong Swee Lin, there will always be more to cherish, as he was the photographer who snapped the shot of Tunku Abdul Rahman announcing the country’s independence in Malacca on Feb 20, 1956.

Wong, who was with the Information Department as a photographer, continued to photograph the Tunku throughout his tenure as prime minister. 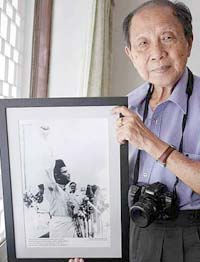 “Tunku had just returned from London after negotiating Malaya’s independence and I followed him from the airport to the Banda Hilir field (now known as Padang Pahlawan),” said the 82-year-old Wong.

He recalled that the Tunku had arrived in a Nash Rambler vehicle bearing registration number M 4422, and then led a crowd of over 100,000 people who gathered at the field to shout “Merdeka!” seven times.

“It was a proud moment for me because I knew these photos would still be used even after a thousand years,” said Wong, whose momentous pictures were featured in exhibitions and a commemorative book titled 1957-2007 Chronicle of Malaysia Fifty Years of Headline News.

The grandfather of two remembers the Tunku as a very jovial person.

“He also liked to eat durian with glutinous rice and enjoyed dancing,” said Wong with a smile.

Looking back over the past 51 years, Wong said he was glad to see how the Government had developed and hoped there would be continued peace.

“Things are very different now, but I believe Tunku would have been proud to see what we have achieved,” he said.

Wong was also there to witness the Tunku declare independence from the British at Stadium Merdeka on Aug 31, 1957.

Wong’s colleague, the late Ng Weng Hong, was the one who took the iconic picture of the Tunku raising his hand to proclaim the nation’s independence at the stadium.

“I remember the stadium was filled to the brim with people anxious to see what was going to happen next.

“Then after Tunku Abdul Rahman cried out 'Merdeka!', everyone erupted with joy,” he recalled, describing the event as an “unforgettable moment” in his life.