JOHOR BARU: The SK Taman Daya 2 canteen has been closed after 43 pupils came down with food poisoning on Saturday.

Johor Health department director Dr Mohd Khairi Yakub said the canteen was ordered to close down on Sunday after failing a cleanliness check.

“They have two weeks to clean up before we visit them again for another check,” he said yesterday.

He added that it was still being investigated whether the poor cleanliness caused the food poisoning.

“We are waiting for test results of the food samples we took from the canteen,” he said.

The pupils, who were attending replacement classes, suffered abdominal pains and vomiting after eating chicken nuggets at the canteen.

They were rushed to the Sultan Ismail Hospital and received outpatient treatment. 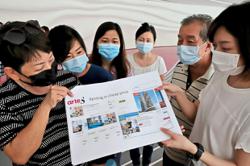