Raja Petra, 58, however, refused to record his plea at the Jalan Duta court complex here on Thursday.

He is alleged to have defamed Deputy Prime Minister's wife Datin Seri Rosmah Mansor by making a libellous statement in the declaration which he affirmed on June 18 when he knew that it would tarnish her good name.

The news portal editor was said to have committed the offences at High Court (Civil 5) in Jalan Duta court complex at 10.25am on June 18.

Raja Petra told magistrate Nazran Mohd Sham that he refused to record his plea on the grounds that the charges against him were both defective and mala fide (in bad faith).

"I do not want the prosecution to interpret it as I have pleaded not guilty. I am refusing to respond to a plea. How does the court interpret that? I have two grounds and if the court wishes to know I can explain," he said loudly when his charges were read to him at noon.

The blogger said he would even sack his lawyer and represent himself if his counsel accepted the prosecution's contention that he wanted to claim trial. 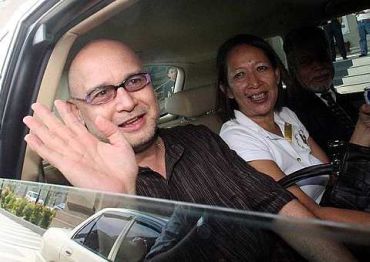 Blogger Raja Petra Kamarudin and his wife Marina Lee after he was released on bail Thursday.

At this juncture, DPP Anselm Charles Fernandis asked for a joint-trial saying that he had produced a complaint by the Public Prosecutor under Section 131 of the Criminal Procedure Code.

The prosecutor asked the court to set Raja Petra's bail at RM10,000 in one surety.

Pleading for lower bail, lawyer J. Chandra said that his client had co-operated with the police and that each charge under Section 500 of the Penal Code only carries a jail term of up to two years or a fine or both.

Upon hearing this, Raja Petra shocked the packed courtroom when he immediately told Nazran that he wished to sack his lawyer and wanted to argue his own case.

"I want to object to bail. There is no necessity for a bail to be imposed. I have appeared in many courts. I have been co-operative to the police," he said.

Nazran then asked Raja Petra to give him a chance to record down whatever he wanted to say over his bail application.

"If you do not respect me, it is okay, but please respect the court. Please give me a chance to record as I could not jot it down in time," Nazran told him.

Chandra then asked the court to adjourn for him to get further instructions from Raja Petra over his plea. The court adjourned for 50 minutes.

When the court resumed, Chandra said his client applied to be released on a personal bond without surety.

DPP Anselm objected saying that the arguments were not relevant to his bail.

His other lawyer Lim Lip Eng said Raja Petra was willing to attend his trial and would not abscond.

Another counsel Amarjit Singh Sidhu argued that the court had the discretion to allow a bond for the bailable offence.

DPP Anselm objected on the bond application saying that the court had to take into account the gravity of the offences and parties involved as well as the fact that an arrest warrant was issued against Raja Petra earlier.

After the court was adjourned for 10 minutes, Nazran granted a bail of RM2,000 in one surety for him and set Aug 15 for mention.

Upon release from bail at 3.45pm, Raja Petra smiled and said his wife changed his mind about the bail.