The Government had earlier said the new line and extensions should be ready by 2012. Sources said with the average construction period taking three to four years, work would have to start by the end of this year.

The 40km route covers some of the most densely populated areas in the Klang Valley such as Damansara and Cheras as well as the fast growing area of Kota Damansara. 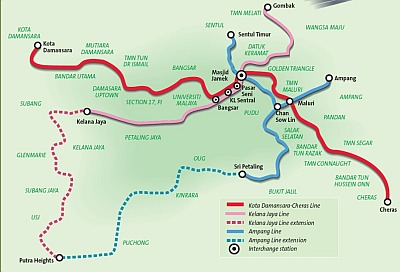 It will also serve the heart of the Golden Triangle, the business and financial hub of Kuala Lumpur.

Currently, the area is only served by KL Monorail, which is already suffering from overcrowding.

The new line, which sources said would cost between RM4bil and RM5bil and will be mostly elevated, will provide the much needed expansion to the current 56km, 48-station light rail transit network, especially in view of the rising fuel prices and the new emphasis on public transport.

The line was announced in October 2006 by Deputy Prime Minister Datuk Seri Najib Tun Razak but little has been heard about it since then.

The alignment, made available to The Star, showed the new line running from Kota Damansara along Persiaran Surian to the Damansara-Puchong Expressway and then heading towards the city centre along the Sprint Expressway, through Bangsar Baru and Jalan Bangsar.

It will then run parallel to the existing Kelana Jaya LRT line (formerly Putra-LRT) to KL Sentral, Pasar Seni and Masjid Jamek before heading to the Golden Triangle along Jalan Raja Chulan.

The route will then pass Pasar Rakyat in Bukit Bintang and then Jalan Tun Razak where it will join Jalan Cheras.

It will continue along the road and the Cheras-Kajang Expressway to the Balakong interchange near Cheras Batu 11.

Passengers will be able to switch with the existing Kelana Jaya LRT line at Bangsar, KL Sentral, Pasar Seni and Masjid Jamek; and the Ampang LRT line (formerly Star-LRT) at Masjid Jamek and Maluri.

There will be around 30 stations along the line, including the interchange stations.

Sources said the route was a “desktop alignment” which would form the basis for the eventual line. The number of stations has also not been finalised.

The final alignment and number of stations is unlikely to vary in any major way from the “desktop” plan.

As with the other lines, the new line will be owned by Syarikat Prasarana Negara Bhd and operated by RapidKL.

While the Government has yet to announce when work will begin on the new line, sources pointed to the “positive statements” by Second Finance Minister Tan Sri Nor Mohamed Yakcop after a briefing session with Backbenchers last Thursday.

Nor had announced that public transport would be getting more incentives, allocations and assistance in Budget 2009 and future budgets.

Sources said the Government was also currently conducting the mid-term review of the 9th Malaysia Plan and there were concerted efforts to get the new line in.

Besides the new line, the Government is also trying to get extensions to the Kelana Jaya and Ampang Lines started.

The extensions will cover Subang Jaya, USJ, Kinrara and Puchong and meet at Putra Heights.