KUALA TERENGGANU: Malaysia has sought no loan, grant or any other kind of monetary help from the International Monetary Fund or World Bank to fund the projects in the country’s development corridors.

Nor will the Government do so in the future, said Prime Minister Datuk Seri Abdullah Ahmad Badawi. 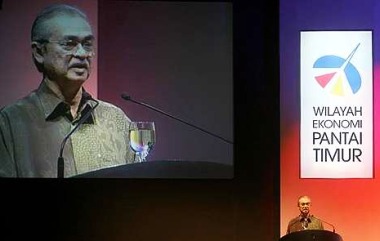 Larger than life: Abdullah delivering his speech during the launch of ECER Development Council and ECERIncentive Packages at University Malaysia Terengganu yesterday.

“The allegations made by certain quarters are lies. It is an attempt to derail what the Government is doing and I am also aware that some had misinterpreted the corridor concept for their own political mileage,” he said at the launch of the East Coast Economic Region (Ecer) Development Council and Ecer Incentive Packages at Universiti Malaysia Terengganu yesterday.

“This kind of people (rumour mongers) exist. They are spreading the word that the Government is cutting fuel subsidies and has no funds and therefore was resorting to borrowing to fund various mega projects.

“They are doing so with malicious intent, hoping that the Government would fall out of favour with the people. The naysayers give incorrect views, make assumptions and allegations,” he said.

However, Abdullah said he was not worried because he was sure the people were mature enough to assess the truth.

Abdullah said all programmes initiated in the corridors were small- and medium-scale people-centred programmes like education and agriculture programmes.

“Moreover, large-scale infrastructure programmes are being reviewed by the Economic Planning Unit to ensure only people-centric projects are implemented to uplift the socio-economic level of the rural folks on par with those in Klang Valley,” he said.

Abdullah also announced the Ecer had attracted RM18bil in investments to date.

He also announced the appointment of Datuk Jebasingam Issace John as Executive Officer of Ecer Development.

Abdullah will chair the council that will include the deputy Prime Minister and the mentris besar of Kelantan, Pahang, Terengganu and Johor.

Abdullah also unveiled a package of incentives to promote development and attract more investments in the Ecer.

Among them was a 10-year tax exemption, effective immediately, for companies in the tourism, education, petrochemical manufacturing and agriculture industries.