Global reforms to meet the 3F

LONDON: Malaysia will discuss the need for reform of international institutions with Asean and other regional groupings in facing the global challenges posed by the “three Fs” – fuel, food and finance.

Deputy Prime Minister Datuk Seri Najib Tun Razak said it was important to convince other global alliances such as G8 and G7 to accept the decision made by the Commonwealth.

He said Malaysia would play its part and raised the matter with Asean countries in a bid to come up with a common stand on the issue.

“We will work closely with the other groups to prevent the problem of the three Fs from continuing to haunt the world,” he told Malaysian journalists at the close of the two-day Commonwealth mini summit on reform of international institutions held here. 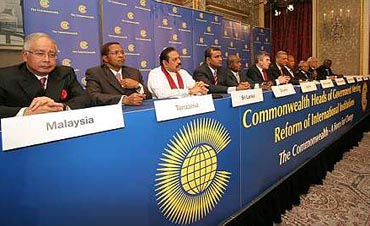 Towards a common stand: Najib (left) and leaders during a press conference afterattending the mini-summit of the Commonwealth Heads of Government at MalboroughHouse in London yesterday. — Bernama

Najib was among 11 Commonwealth leaders who attended the meeting, which focused on practical steps towards reform and coherence of global institutions such as the World Bank, International Monetary Fund and the United Nations.

The summit is the first step in implementing the decision of the November 2007 Commonwealth Heads of Government Meeting (CHOGM) meeting in Kampala where a small representative group was formed to undertake lobbying and advocacy for the reform of international institutions.

Najib said the reform was necessary in light of the global crisis involving the rising costs of fuel, food supply, security and pricing problems as well as the financial and credit squeeze.

Expressing satisfaction with the outcome of the summit, he said:

“We’ve got the framework and some substance as well to move it forward. Now we’ve to create more global alliances with other power centres,” he added.

On the response of the World Bank and IMF towards the reforms, he said it would depend on their governors who were in turn controlled by their respective countries, especially the United States and G7.

“We have to work hard with the leadership of the next US president as his stand on the new global perspective is important,” he said.

Najib expressed confidence that the developed countries would accept the reforms although they might have different opinions on the nature and substance of the changes.

He said the reforms framework included the role of the IMF and World Bank, their responsiveness towards needs of developing countries, early warning crisis system and surveillance.

He said they also discussed how the World Bank could, for example, become a source of funding for development of alternative sources of energy.

On reform of the United Nations, he said the meeting stressed that more resources should be spent on country programmes rather than administrative costs in running UN agencies.