Protests over fuel price hikes all over

By Voicing The People’s

GEORGE TOWN: Several politicians in Penang have joined the call for the Federal Government to review the recent fuel price hike.

Penang Domestic Trade and Consumer Affairs Committee chairman Abdul Malik Abul Kassim said the Government should not add to the people's burden by removing the fuel subsidy as “we are already suffering from rising food prices.”

“Everything from food to sundries is sure to rise further,'' said Abdul Malik, at a gathering of non-governmental organisations, outside Komtar yesterday.

Among them were assemblymen Koid Teng Guan and Jason Ong who made similar calls to the Government over the new fuel prices. 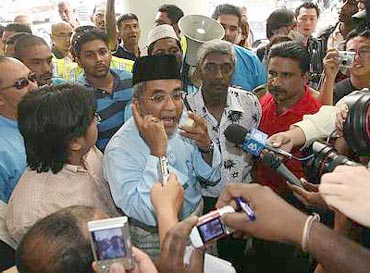 George Town OCPD Asst Comm Azam Abd Hamid said the police allowed the gathering to go on for 30 minutes although they did not have a permit, adding that the group dispersed shortly after that.

But in Sungai Petani, five people were detained in a demonstration in front of SP Plaza which houses the Sungai Petani Municipal Council (MPSPK) office.

Another group also staged a peaceful demonstration near the Sungai Petani clock tower over the same issue.