Petrol price up by 78 sen - and will be reviewed monthly

PUTRAJAYA: The Government announced yesterday an increase in petrol and diesel prices, stating that it can no longer continue to subsidise fuel.

In other words, if the market price is RM3 per litre, Malaysians will be charged RM2.70 at the pump. He said the price would be adjusted monthly based on the global oil price. 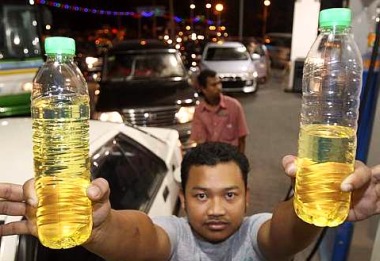 Half empty or half full?: Azhan Sharom showing the difference of how much petrol onecan buy with RM1 Wednesday and today at a petrol station in Kuala Terengganu.

“Malaysians still pay lower than the market prices as far as petrol is concerned,” he told a packed press conference when announcing the restructuring of the subsidy package.

Abdullah said that although the restructuring would result in consumers having to pay more, prices were still lower compared with Singapore and Thailand.

He said the Government would save RM13.7bil through the restructuring.

From the savings, he said RM4bil would go to the National Food Supply Guarantee Policy, RM1.5bil for subsidising cooking oil and RM400mil to subsidise rice imports to make the price uniform in peninsular Malaysia, Sabah and Sarawak.

The Government would also spend RM200mil on flour subsidy, RM100mil on bread subsidy and RM7.5bil was meant for contributions to the subsidies for petrol, diesel and gas.

On top of that, Abdullah said, the Government would have to fork out RM5bil to pay to owners of cars and motorcycles eligible for rebates introduced under the restructuring of subsidy package.

“Our effort is certainly not an attempt to be popular but we try our best to help the people. We cannot satisfy everyone,” he said.

Abdullah said demand for public transport would go up with the rise in fuel prices and the Government was currently addressing the need to improve services.

He reiterated that the public should make changes to their lifestyle, saying they must ensure there was no wastage in resources such as water, energy and food.

He said if certain adjustments were made, the public would not be “too badly affected by price increases”.

He said the hike in fuel prices would cause a projected increase in inflation of around 4% to 5%. It would also have an impact on the country’s gross domestic product (GDP) growth but was confident that it could be maintained at 5% this year.

Abdullah said the Cabinet committee on anti-inflation had to come up with a system to ease the public’s burden from higher fuel prices.

“What is important is that we want to ensure the restructuring will encompass a mechanism that will protect and benefit those in the lower and middle income group.

“We are truly committed in ensuring these groups will not be burdened by the increase in petrol and food prices,” he said.

Asked if the subsidy restructuring would result in Malaysians going to the streets to demonstrate their unhappiness, Abdullah was confident the people would not resort to that.

> For industrial users (consuming less than2mmscfd) – from RM9.40 per mmBtu toRM24.54 per mmBtu

> Sabah and Sarawak 7.5% for every tonneof CPO exceeding RM2,000> Abolition of cess tax

Related Stories:Foreign car fuel ban off New ruling goes down well with Singaporeans New scheme will make economy more efficient Putting the skids on buses, lorries Get ready for aftermath, Government warned Many find the increase hefty and will affect their lifestyles Khalid: Rebates a must to cushion impact of higher fuel prices Scenes of chaos at petrol stations Ka Chuan: We have no choice Another burden for us, say the disabled Cooking gas delivery charges may go up Idris: There’s no global fuel shortage Shahrir studying ferry operators’ request for subsidised diesel Muhyiddin: We’ll help industries Electricity rates go up