SEREMBAN: Drug syndicates are targeting markets here following stringent measures taken by the police to check trafficking in the Klang Valley and Johor.

State narcotics chief Supt R. Ravi Chandran said the number of arrests in the state had skyrocketed in the first quarter of this year and more young people were being caught for trafficking. 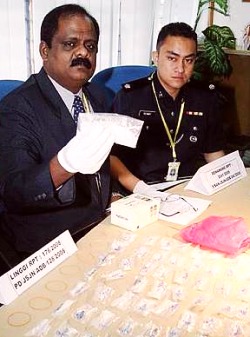 Drug haul: Supt Ravi with the seized heroin and syabu in Seremban.On his left is Inspector Mohd Airulsukri @ Remmy Saini.

“We have already made 55 arrests under Section 39B of the Dangerous Drugs Act in the first four months of this year, against 16 for the corresponding period last year.

“This goes to show that the syndicates are trying to sell drugs here as police have stepped up enforcement in other states, particularly in the Klang Valley and Johor,” he told reporters at his office here yesterday.

Supt Ravi said that in the latest arrests, police detained two men, aged 20 and 26, in separate raids here on Thursday and Friday for trafficking heroin and syabu. Both were from outside the state.

“The syndicates are luring younger people to act as mules and this is worrying,” he said, adding that both the men were also addicts.

Police also seized a Honda Accord from the 26-year-old suspect, who crashed into a road divider at Taman Seremban Jaya while attempting to escape.

Heroin and syabu with a street value of RM77,700 were seized in both raids.

Supt Ravi said police also detained 50 people under the special preventive laws as they were believed to be involved in the planning and distribution of drugs in the state compared with only 30 last year.

“The syndicates carry out their activities in oil palm plantations thinking they can escape the police dragnet. We are aware of this and will increase surveillance in such areas,” he said.

“This does not include the 915 addicts detained after testing positive for drug abuse,” he said, adding that 67% of all drug cases involved heroin abuse as it was cheaper compared to other drugs.

Supt Ravi said without help from the public, the police would not be able to effectively check trafficking.

“We are most grateful to members of the public for tipping us off. We would not be able to achieve a high success rate if not for their help,” he said.

The public can call the police at 999 or ASP Mohd Isa Bidin at 06-7682402 to report drug-trafficking activities.