The sailboat docked at the KD Sultan Abdul Aziz Shah Jetty in Pulau Indah here amid a grand welcoming ceremony attended by the Sultan of Selangor, Sultan Sharafuddin Idris Shah. 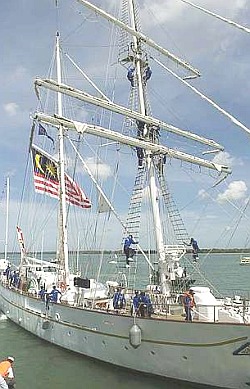 Tunas Samudera set sailed from Port Klang on March 21 last year, voyaging across the Indian Ocean, the Pacific and Atlantic and some of the world's major oceans.

All in all, she had made stopovers at 25 ports.

Two crew sets were tasked for the mission, the first comprising 47 including two women, for the voyage from Port Klang to Cherbourg, France, and the other comprising 42 personnel, was for the journey home from the French port back to Port Klang.

While on her sailing mission, the boat also took part in the Tall Ships' Races 2007 across the Baltic Sea from Stockholm, Sweden to Szczecin, Poland, from July 5 to Aug 5.

Tunas Samudera, which was captained by Capt Rusli Idrus during the race, finished 13th in the Class A category and 63rd overall out of 115 boats, and was awarded The Best Newcomer by the Sail Training International, the race organiser.

Sultan Sharafuddin, who is the captain-in-chief of the navy, said in his speech that he had been following the progress of the trip and was satisfied by the boat's first voyage.

“In view of the successful mission, I would like to suggest that similar mission be carried out at least once in three years,” he said.

Capt Rusli said sailing on Tunas Samudera and cutting through waves which at times could be as high as six metres was definitely a different experience compared to sailing on battleships. – Bernama