History in Perak, after rows

By CHRISTINA KOH and SYLVIA LOOI

IPOH: History was made when Tronoh assemblyman V. Sivakumar became the first Indian Speaker to be elected to the Perak State Assembly.

However, his election was preceded by several shouting matches between Pakatan Rakyat and Barisan Nasional assemblymen.

Fifteen minutes into the proceedings, Pakatan Rakyat assemblymen pointed out that Junus was not in the assembly. 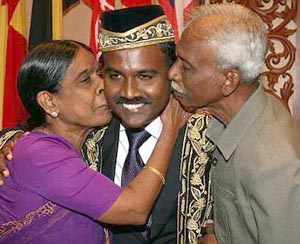 Ngeh Koo Ham (DAP - Sitiawan) cited the Standing Order saying a candidate for the post of Speaker must be physically present in the hall.

This led to a debate with former Mentri Besar Datuk Seri Mohamad Tajol Rosli Ghazali (BN - Pengkalan Hulu) who clarified that if Junus’ presence was required, he should have been notified.

Another round of yelling occurred when a decision had to be made on whether the Speaker should be elected through secret ballot or by having the secretary collect the ballots from each assemblyman.

Barisan argued for secret ballots but this prompted several Pakatan Rakyat representatives to object, insisting that the Standing Order stated that the ballots must be collected from the “desk” of the representatives.

Sivakumar was finally proclaimed as Speaker at 4.05pm yesterday with 31 votes against Junus’ 28.

Jelapang assemblyman Hee Yit Foong, a polio victim since she was four, also created history as the first female and first disabled person to become deputy speaker. Unlike Sivakumar's, her election was smooth.

Speaking to the press after the swearing-in ceremony, Sivakumar said reviewing the assembly's Standing Orders would be his priority .

He said he wanted to review the Orders in detail to see what was still relevant and what was not.

“I will also look into improving other aspects of the Dewan such as opening its library to the public,” he said.

Perak Barisan Nasional chairman Tajol Rosli, meanwhile, confirmed that he would speak for Barisan in the assembly.

He was however loath to call himself Barisan’s opposition leader.