KUALA TERENGGANU: Bus driver Zaiton Muhammad is believed to have been coaxed by a relative into following him to a secluded place and murdered there.

A close relative, when contacted by The Star yesterday, said Zaiton, 55, had told one of her daughters that she was on her way to meet one of their uncles who was facing financial difficulties.

“That's what she (Zaiton) told us before leaving the house late April 16 evening,” said the close relative, who only wanted to be identified as Aida.

“Several of our neighbours had also seen my aunty having a drink with the man, who is also our distant relative, the day before she went missing.” 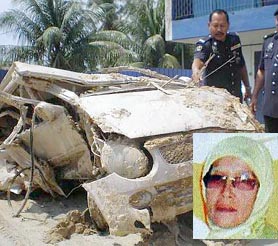 Zaiton, a mother of seven, was found buried in a nursery in Kampung Bukit Takar, Ibok, in Kemaman district, on Monday, six days after she was reported missing.

Police also recovered her car, which had been damaged, several kilometres from her body.

Zaiton's third daughter Norliana Alias said she was slowly accepting the fact that her mother was dead.

“It has been hard for us to accept that our mum is no longer with us and, worse, that she was a victim of a gruesome murder,” the 25-year-old said in a voice choked with emotion.

“My siblings and I have confidence that the police will solve the case,” she added.

State CID chief Asst Comm Mohd Fauzi Abduri said the post-mortem indicated that Zaiton could have been strangled, and that she could have been murdered on the day she went missing.

When Zaiton, from Kampung Bakau Tinggi, failed to return home, Norliana lodged a report at the Chukai police station.

On Monday, police, acting on a tip-off, detained a 27-year-old suspect at a chalet in Cherating, Pahang. He later led police to the body and the car.

Police also seized three gold rings, a gold bracelet and about RM500 in cash from the man, who has been remanded until April 29, to help in investigations.