KUALA LUMPUR: Former Chief Justice Tun Mohamed Dzaiddin Abdullah hit out at his former boss Tun Eusoff Chin, saying that he lacked direction and leadership when he was top judge.

He said that when he served under Eusoff as Federal Court judge in the 1990s, the latter also kept lying to him.

“There was a lack of direction in the way we performed our work, settled cases and fixed cases (for hearing),” he told the Royal Commission of Inquiry.

Asked if he hated Eusoff, Dzaiddin said: “I don’t hate Eusoff Chin but I dislike him.”

He said he had such ill feelings for Eusoff because the latter kept lying. His remarks drew applause from those in the public gallery.

“He kept talking about the conferment of Tan Sri-ship for me when I was a Federal Court judge. He said he had proposed my name but it was something beyond his power. It was not true.

He also said that he was marginalised during Eusoff’s reign as top judge but denied that there were two camps within the judiciary.

He also dismissed suggestions that he was attacking Lingam’s cases.

“I cannot fathom what he is talking about (in the video clip). I never attacked his cases or those handled by his firm.

“As the then Chief Justice, I did fix the quorum for appeals but I’ve never sat on those panels involving cases handled by Lingam,” he said.

He said he had proposed that the late Tan Sri Abdul Malek Ahmad be made the Chief Judge of Malaya (CJM) before Tun Ahmad Fairuz Sheikh Abdul Halim but the proposal was rejected by the then Prime Minister Tun Dr Mahathir Mohamad.

“I am very sure I recommended Tan Sri Malek first because he was then the most senior Federal Court judge, compatible and most importantly, a judge of integrity,” he said.

He said Dr Mahathir did not agree with his recommendation of Abdul Malek and had instead asked that the late Tan Sri Mohtar Abdullah or Ahmad Fairuz be made CJM.

“I recommended Ahmad Fairuz ahead of Mohtar and I gave my reasons in my letter to the Prime Minister,” he said.

Asked if the act of lobbying for the position of the President of the Court of Appeal amounted to “tarnishing the good name of the judiciary”, Dzaiddin said that it was, adding that such misconduct ran foul of the judges’ Code of Ethics 1994.

On the Tan Sri title conferred to Ahmad Fairuz just one year after the latter was made the CJM, Dzaiddin said Ahmad Fairuz admitted to him that it was based on the recommendation of then Deputy Minister in the Prime Minister’s Department Datuk Seri Tengku Adnan Tengku Mansor.

“I was surprised because it was improper. It should be recommended by the head of department, in this case, the Chief Justice of the Federal Court,” said Dzaiddin.

He also said he condemned judges who went out with lawyers, especially when the lawyers had cases before the judges.

Related Stories:Lazar: It’s an outrageous lie Fairuz: ‘Not proper for lawyer and judge to go on holiday together’ Brace for more videos, says Anwar ACA: No calls between former CJ and Lingam Pointless to sue for defamation, says Vincent Tan Tan disappointed, upset with Lingam 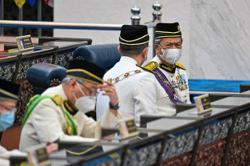