FEBRUARY 26 is a very special day for Olga Kathigasu. She was born on this day slightly over 86 years ago, or rather 86 years and 12 days ago as Olga would insist. Her memory is very sharp.

Olga is the only surviving member of the legendary Kathigasu family. She is the eldest daughter of the World War II Malayan heroine Sybil Kathigasu. Her father Dr A.C. Kathigasu and Sybil were respected for their daring activities helping anti-Japanese resistance fighters in Papan.

“I went away on Feb 25 but I can’t tell you where,” she says, like a child hiding a secret.

“At midnight I will celebrate by thinking about the three people closest to me, my mummy (Sybil), my daddy (Dr Kathigasu) and grandma (Beatrice Matilda Daly). I am most connected to them because they gave me life,” says Olga.

Authors of the recently published book Faces of Courage, Norma Miraflor and Ian Ward, were introduced to Olga by Perak Heritage Society president Law Saik Hong when they were doing research for a book on Chin Peng.

Olga does not hesitate to reveal that she had a bittersweet relationship with Sybil.

“She was very brave. When I saw her in prison she tried to tell me where the bullets were hidden in the Papan house. To make sure I understood, she turned around, took a piece of paper from the jailer’s desk and drew the location for me.

“After she had drawn the diagram, she crushed the paper and chucked it onto the floor. What if the guards had asked us what was on the paper? What if they had picked it up?”

(Dr Kathigasu and Sybil operated from their 74, Main Street house in Papan helping to treat the “hill people” – the guerillas. The doctor removed bullets from a wounded guerilla’s ankle. When the guerilla was caught by the Japanese he admitted that the doctor had removed the bullets from him. Dr Kathigasu and Sybil were subsequently arrested but the Japanese needed proof to sentence the doctor to death.)

“My mother told me: ‘You must get rid of that (the bullets). Your daddy’s life depends on it. If found, your daddy’s head will go off!’

All I could think of was that they both should not die in prison. The chief justice was to give the final verdict on their death sentence in two weeks’ time.

“I managed to find the bullets kept in a vitamin bottle together with a note for the hill people near the vegetable patch at the rear of the house. I burnt the note and threw it away before taking the bullets and throwing them into Sungai Pari near Menglembu, making sure no one saw me doing it.”

Olga admits that she was never close to Sybil even though they were quite alike in temperament and looks. She speaks dearly about her grandma whom she said had saved her life twice.

“I never worked a day in my life. I used to tell people I was daddy’s pet, mummy’s dumpling and grandma’s darling,” she declares.

Olga griped about not making it to medical school in Singapore as the school she attended in Ipoh did not prepare her for the entrance exam.

“People used to tell me that I must be proud that my mother was given the George Medal for her bravery. But I would say not because I didn’t want her to do silly things (like helping the hill people). I wanted her to be alive to share my joy and sadness,” she says.

(The George Medal was institutes by England’s King George VI to recognise civilian bravery in the face of enemy action.)

Today she lives in a private welfare home in Canning Garden in Ipoh and survives on the interest from the RM28,000 that Dr Kathigasu had willed to her.

As she put on her reading glasses and, with trembling hands, signed her name on a copy of Faces of Courage, she gestured for me to come closer and whispered where she had gone to hide for her birthday and that she would be around for many more birthdays to come. 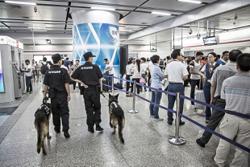 Colours of China 23h ago

When love turns into hate and murder