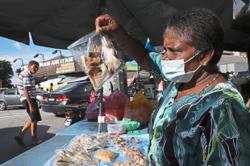 TAIPING: The big fish that drew curious spectators to the Lake Gardens here over the past few days has been caught by Taiping Zoo workers using fishing nets.

And, as suspected by zoo director Dr Kevin Lazarus, the 1.7m-long fish is an arapaima.

It is believed to have been released into one of the ponds at the Lake Gardens by its former keeper.

Dr Lazarus said yesterday the fish was being quarantined before it was released into a vacant pond near the zoo’s entrance.

“We have nine arapaima in the pond already, and most of them are about two times longer than the one netted at the Lake Gardens (on Wednesday).

“This newly caught fish can’t be released into the pond with the nine other arapaima as it won’t survive. These fish are very territorial, and they don’t easily accept a newcomer,” he said.

Dr Lazarus believes there could be other arapaima in the Lake Gardens and has assigned men to look out for them.

Although the presence of these fish provide an additional attraction at the Lake Gardens, some quarters fear they could easily wipe out the other fish population there.

About three years ago, the Taiping MCA division together with the Taiping Muncipal Council and Chuan Sin Sdn Bhd released 33,333 fry of Japanese carps or koi into the Lake Gardens. Little of seen of them. 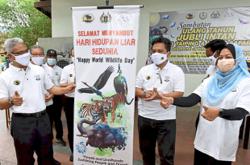