Kith and kin of missing boat owner hope for miracle

KUCHING: Trawler owner Poh See Teck has been missing for about 10 days but his family and friends are hoping he is still alive.

The whereabouts of the 42-year-old Poh from Sungai Apong fishing village here and a eight-man crew remain a mystery although his trawler was found berthed at a wharf in Sarikei a day after a missing person's report was lodged with the Santubong police here a week ago.

Poh's fisherman friends, who have helped to search for him, are hoping for a miracle and want to see him return home safely.

They have also urged the authorities to speed up investigation into the case.

The missing trawler crew, who went out to sea about two weeks ago, include a local, Irwan Bujang, and seven Indonesians.

A police forensic team was believed to have found what appeared to be a bloodstained cloth on board the trawler.

State CID head SAC (II) Karn Kam Peng has, however, said police could not confirm whether the stain was blood or another substance as they had to wait for test results.

Poh’s family retrieved some of his possessions from the trawler when it was brought to the Bintawa marine police base here on Saturday evening. 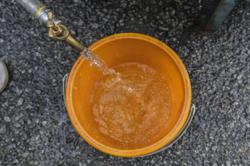