LOST CITY: (Feb 3) Artefacts dated older than the Malacca Sultanate have been found in the area where the lost city of Kota Gelanggi is said to be located in Johor. These finds have reinforced claims of the existence of the ancient site which independent researcher Raimy Che-Ross said he had located last year. Raimy spent 12 years researching Malay manuscripts all over the world and conducting aerial searches of the area before locating the site of Kota Gelanggi or Perbendaharaan Permata (Treasury of Jewels). On Feb 4, the Government said it is giving top priority to the search for Kota Gelanggi and will provide the necessary funds for it.

CRACKDOWN PUT OFF: (Jan 31) The nationwide crackdown on illegal immigrants and employers, scheduled to begin on Feb 1 after the expiry of the amnesty period, was called off pending further notice. On Feb 1, Home Minister Datuk Azmi Khalid said the amnesty was over and there was no postponement. Instead of a tough crackdown, however, illegal immigrants are being “politely” persuaded to return to their home countries.

RM50M MSC STING: (Feb 1) A Multimedia Super Corridor (MSC) company chief executive officer has allegedly siphoned off more than RM50mil from its coffers by depositing the money into a company in the United States headed by him. The 55-year-old CEO, from a foreign country, said to be one of the world’s leading scientists and technologists, is also the chairman and president of the company. rch and development last year. The Finance Ministry has frozen the accounts of the company located in Cyberjaya after two police reports were lodged against the chief executive officer.

18 DEAD: (Feb 3) The Sarawak Health Department has confirmed that four more Penan children have died of measles, bringing the toll to 18. State deputy health director Dr Andrew Kiyu said three were from the Long Menapa settlement while the fourth was from Long Singgu, both in the Murun River Basin in Belaga district.

NO BAIL: (Jan 30) Employers who engage more than five illegal foreign workers may find themselves languishing in jail until their cases are disposed of. The Immigration Department says it wants the police and courts to refuse bail to errant employers because the offence is a serious one.

WARNING SYSTEM: (Jan 29) After two days of discussions in Phuket, Thailand, for a regional centre for a tsunami early warning system, Malaysia is forging ahead with plans to set up its own system. The national early warning system could be linked to other centres, like those in Indonesia and Thailand, said Science, Technology and Innovation Minister Datuk Seri Dr Jamaluddin Jarjis.

DATUK DEAD: (Jan 31) Business tycoon Datuk Syed Ibrahim Syed Mohamed was found dead with gunshot wounds at his home in the affluent Bukit Tunku area in Kuala Lumpur. Family members of the 55-year-old multimillionaire, who was indirectly linked to several public-listed companies, were away from his posh double-storey house when the incident occurred.

BRACE FOR RATIONING: (Jan 29) Several states are bracing for water rationing in the months ahead as levels in their dams and rivers dip in the wake of the current dry spell nationwide. However, the state water authorities report that the situation has not reached an alarming stage although they have advised consumers to use water prudently.

KARPAL INJURED: (Jan 29) DAP national chairman Karpal Singh, 65, suffered neck injuries on Jan 28 when a car rammed into the taxi he had taken from the Penang International Airport to his house in Jalan Utama, Penang. The accident happened at midnight. Karpal was warded at Gleneagles Medical Centre.

ACQUITTAL UPHELD: (Jan 29) Hanif Basree Abdul Rahman will continue to have the freedom he enjoyed in the past six months as the Court of Appeal upheld his acquittal from a charge of murdering Noritta Samsudin. After the hearing, the 38-year-old engineer said he hoped to “have an unending chance to smell the air of freedom.” But he has one more hurdle to cross – the prosecution wants to take the case to the Federal Court.

HEADING HOME: (Jan 31) Thousands of illegal immigrants, mostly Indonesians, left Malaysia for home on the last day of the amnesty granted by the Government. In Port Klang, about 7,000 Indonesians left for home via South Port. About 5,500 left at 10pm on the cruise vessel K.M. Umsini chartered by the Indonesian government.

AUTO LISTING PROPOSED: (Jan 31) Malaysians who turn 21 will automatically be eligible to vote under an Election Commission proposal. Commission chairman Tan Sri Abdul Rashid Abdul Rahman said the proposed amendment to the law to enable citizens attaining the age of 21 to be voters without having to register would be submitted to the Government soon.

IN FULL FORCE: (Feb 3) The traffic police will be calling on their colleagues from the other branches to help in Ops Sikap to ensure safer roads during the Chinese New Year period. Federal traffic police chief Senior Asst Comm (II) Datuk Gingkoi Seman Pancras said state police chiefs have been given the mandate to deploy men from various divisions and departments to assist the traffic police.

LIMIT RETAINED: (Jan 30) Opec producers agreed to keep output limits on hold, convinced that oil prices near US$50 (RM190) a barrel are not stifling world growth. The Organisation of the Petroleum Exporting Countries (Opec) took little time to settle on no change in supply quotas, despite worries among consumer nations about inflated fuel costs.

NOD FOR CENTRES: (Jan 30) Nations ravaged by last month's tsunami agreed to create several regional warning centres for future disasters, as Indonesia and rebels in hardest-hit Aceh province cut short ceasefire talks in Finland, bringing more uncertainty to the safety of relief efforts. On Phuket Island, 47 nations and agencies approved a plan on Jan 29 to set up a warning network for southern Asia with several separate regional centres after failing to resolve differences over where to base a central hub.

WRECKAGE FOUND: (Feb 4) The wreckage of an Afghan airliner Kam Air Boeing 737 that went missing with 104 people on board was found near the capital, Kabul, a day after it was turned away because of heavy snow, a Western security source said.

NEPAL'S NEW CABINET: (Feb 2) Nepal's King Gyanendra unveiled a 10-member Cabinet under his leadership, a day after he sacked the prime minister for failing to hold elections or end an escalating civil war with Maoist rebels.

SIMPLE FUNERAL: (Jan 30) Some 2,000 mourners bade farewell to ousted Chinese Communist Party leader Zhao Ziyang on Jan 29 in a low-key funeral in Beijing that was attended by Jia Qinglin, the fourth-ranking party leader.

POPE STABLE: (Feb 2) Pope John Paul's fragile health stabilised after urgent medical treatment overnight for severe breathing difficulties but he will have to remain in hospital for the time being, the Vatican said. Chief spokesman Dr Joaquin Navarro-Valls said the 84-year-old Pope, who was rushed to Rome's Gemelli hospital late Feb 1, had needed help with his breathing and was running a slight fever.

NEW SEARCH ENGINE: (Feb 1) Microsoft launched its new Internet search engine, months after it debuted in test form. Its own search engine will permanently replace the Yahoo search technology that has been used on its MSN website. But Yahoo’s technology will still be used for the ‘sponsored’ listings that companies pay for, and that appear separately alongside the main search results. 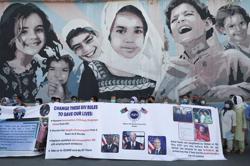