IPOH: Standing in waist-deep water for four hours a day, worker Lee Pak Lin pulls out more than 100kg of lotus roots from the mining pool for the wholesale market.

But come Chinese New Year, Lee will be working harder to meet the increasing demand for the roots, which are a “must have” item for the occasion.

The roots, commonly used to make soup and stir-fry dishes, are also placed on altars for Chinese New Year prayers.

They also symbolise lasting family ties because they are difficult to cut up and separate.

Lotus roots are known as lin ngau in Cantonese, signifying “having plenty every year.”

The 52-year-old Lee will also be earning more money because demand for lotus roots is expected to increase three-fold during the festive season.

Lee, who has been a lotus root collector for the past 35 years, said his day at the mining pool begins at 8am.

Pulling out matured lotus roots one by one, he removes the mud and washes them in the pond located at Kanthan, about 17km from here.

The roots are then placed in rattan baskets and taken to the wholesale market to be sold.

“It was not easy when I first started out but the work is much easier now,” he said.

Lee’s collection of 100kg of lotus roots is part of the one tonne collected and sold every day by wholesaler Liew Ngow Chye.

Liew, who distributes the roots to markets nationwide, said one tonne of the roots was enough on normal days but the demand would rise to at least three tonnes during Chinese New Year.

Describing lotus roots grown by Perak farmers as the best, Liew said: “The roots take about three months to grow before they are harvested.” 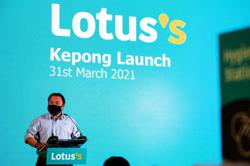