The road to quake-hit Aceh

MEDAN: Adli Muhammad is a law lecturer in Aceh. When the earthquake struck his hometown on Sunday morning, the father of five was so worried about his children back home that he even considered rushing back without his passport.

A PhD student at Universiti Kebangsaan Malaysia, Adli was in a state of panic when he could not reach his family.

“I must have tried the phone a few hundred times but the lines were all down,” said Adli, who was on the 2.45pm flight from Kuala Lumpur to Medan yesterday.

“I cried all the way on the flight. I haven’t eaten since I heard the news,” he said, as he continued to dial some numbers as soon as the plane touched down.

Adli said he almost left Malaysia illegally without his passport which was retained by the university administration to apply for his student pass.

The university returned his passport to him on Monday morning after he explained his concern for his family.

His five children are aged between 12 and one-and-a-half years old.

After having arrived here, Adli still has to travel about 11 hours by road to Banda Aceh where his family lives.

All the three daily commercial flights from here to Aceh are fully booked until Friday.

Garuda had put on an extra flight today but this too had been fully booked.

After exhaustive phone calls to his military contacts, he managed to get a seat on a Hercules plane but is still not sure when it would be leaving.

“But at least I now have a seat,” he said, looking a bit less gloomy.

He gave us his address in Banda Aceh and where we could get hold of him there. He then dropped us at a hotel in downtown Medan.

Finding all the flights full, we had to try our luck at hiring a four-wheel-drive vehicle.

We managed to get one for US$110 (RM418) per day inclusive of petrol – a fair deal considering the state of crisis.

At 3.30am today, we will attempt to travel to Aceh.

The province is still under martial law because separatists there are fighting for independence from Indonesia.

Hence, the authorities are restricting the entry of foreign media into Aceh.

There is no telling whether we will make it to our destination. 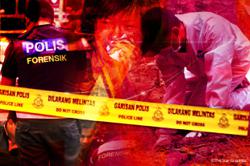