The other two that received the award were traditional orang asli woodcarvings and woven pandanus pouches.

Edric Ong of EO Design said the products could carry the seal on their labels as an endorsement of their quality and authenticity.

“The seal will help in the marketing of these traditional handicraft products.

“When people see the seal, they will know they are getting genuine good quality crafts,” he said yesterday.

Ong, who is also Ahpada president, said the seal programme was introduced in 2000 in collaboration with Unesco as a means of quality control and marketing topromote traditional crafts in the region.

He said this was the only programme in South-East Asia that acknowledged craft producers in the region.

“We are one of the regions where craftsmanship is still thriving and we produce a lot of handicrafts for the international market while maintaining traditional aesthetics,” he said.

“The Unesco-Ahpada programme stresses the quality and exquisiteness of traditional crafts which can be used to make modern products,” he said.

The seal was awarded to 51 craft products from Cambodia, Indonesia, Laos, Malaysia, Myanmar, the Philippines, Thailand and Vietnam this year.

An exhibition of the products themed “The Best of Asean Crafts” will be held at the Aseana Gallery in Kuala Lumpur from Nov 20 to Nov 28. 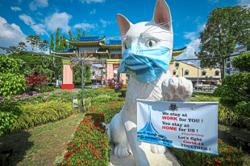