By The Noritta Samsudin Trial 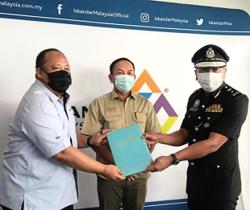 Transpro Sdn Bhd's receptionist Norzahira Shabudin, 21, said she knew Noritta had received such a letter while they were working with the same company.

Norzahira said Noritta's boss Ahmad Nizam Saadon was also aware of the matter but no police report had been lodged.

During examination by lead prosecutor DPP Stanley Augustin, she said the letter was received in August last year.

To a question, Norzahira said Noritta had on one occasion introduced Lim Sin Kean Child's, 39, as “her boyfriend” when they met at Eastin Hotel.

Norzahira also told the court how she had replied to Lim's messages using Noritta's handphone when Noritta asked her to help.

She agreed that Noritta had to meet her clients regularly but was not sure whether there was any need to entertain anyone.

Another prosecution witness, Transpro director Ramli Dahlan, 41, told the court the company had paid Noritta a basic salary of RM1,500 and an allowance of RM500 for her job.

Cross-examined by Sithambaram, Ramli denied that sometimes Noritta had to entertain her clients to get new business.