Malaysia and Singapore agree to resolve issues through negotiations 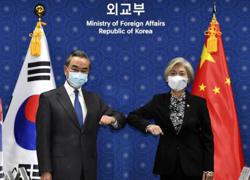 SINGAPORE: Malaysia and Singapore have agreed to resolve outstanding issues at the negotiation table rather than through arbitration.

Prime Ministers Datuk Seri Abdullah Ahmad Badawi and Goh Chok Tong also touched on the possibility that the package of issues between the two countries might have to be “unscrambled.”

They announced this at a joint media conference after an hour-long discussion between them when the Malaysian Premier called on his Singapore counterpart at the Istana, here, yesterday.

“We cannot let them (issues) remain unresolved for the sake of bilateral relations between both countries as well as for Asean,” said Abdullah, who was making his first working visit here as Malaysia’s Prime Minister.

Malaysia and Singapore have had a testy relationship ever since the republic left the Malaysian federation in 1965, with ties strained by a number of unresolved issues, some dating back to the British colonial period.

The issues include a dispute over KTM Berhad land, withdrawal of Central Provident Fund contributions by Malaysians from the peninsula working in the republic, the use of air space and the relocation of Malaysia’s Customs, Immigration and Quarantine facilities from Tanjung Pagar to Kranji.

“I believe we can move forward in resolving these issues in the spirit of good neighbourliness,” said Abdullah.

“We want the problems to be resolved as soon as possible (and) will talk things over in detail.

“It is time for us to move forward, look for new strategies and think out of the box to reach for solutions,” he said.

On the “unscrambling” of the package of issues, he said: “Some can be resolved immediately while some may take a longer time. So, let’s resolve what we can resolve in a shorter period of time first.”

The Prime Minister said he and Goh discussed a wide range of bilateral and regional issues and both leaders acknowledged the need for outstanding issues between the countries to be resolved.

“We have taken a positive and constructive attitude towards finding an amicable solution in resolving such issues.

“I reiterate Malaysia’s commitment to resolve the outstanding issues and am confident that this visit will work positively towards strengthening bilateral ties and enhancing the prospect for meaningful and closer co-operation,” he said.

Goh agreed that his discussions with Abdullah had allowed both of them to review bilateral relations.

He said that Abdullah wanted to try another round of discussions before the two countries take certain issues – which Goh referred to as “dead knots” that were arduous to untie – to a third party or arbitration.

“We agree to take on this approach and we hope it does not have to be that way (arbitration) so that we can move forward,” the Singapore Premier said.

However, Goh added, cases that had already been sent for arbitration, including the joint claim over Pulau Batu Putih and reclamation work at Pulau Tekong, would remain. The new round of discussions would be for other outstanding issues, he said.

Goh said there would be more communication between the two leaders in the future, adding that he and Abdullah would be making regular phone calls to one another, not only to discuss issues concerning both countries, but also “to touch base.”