BAM: Augustino Miozzo, the team leader of Italy’s Civil Protection Agency and Co-ordinator for the European Union for the Bam earthquake, has this message for the Iranian people: “You are an amazing, resilient and courageous people.”

“I have been to many countries which had been hit by disasters in the past 20 years, including earthquakes in Turkey (Ismet) and more recently in Gujarat, India.

“But nowhere have I seen such a devastation. It is really amazing how the Iranians have reacted to the earthquake in Bam.

“They have come together tremendously,” he said as he and his team were planning to leave the field hospital they had set up at Baravat, about 5km from here.

The Italians arrived here on Dec 27, about 30 hours after the earthquake hit Bam on the dawn of Dec 26, and left for home on Sunday.

Miozzo took offence at statements that the poor co-ordination of rescue efforts by the Iranian government was a stumbling block to better management of the disaster.

“No government in the world would have been able to co-ordinate (with) a disaster like this within one or two days,” he added.

“They made the entry of rescue and relief workers easier by lifting (the) visa requirement. And they have gone out of their way to make everybody welcome, and attended to the relief workers' needs as much as they could.

“After two days the Iranians had mobilised thousands of medical personnel, and rescue and relief workers. Within five days they had electricity and also clean water supply.

“Even my country, which has experienced all sorts of disasters, from volcanoes, floods and earthquakes, could not have done as much as the Iranians have within such a short span of time,” he added.

As if to echo Miozzo’s sentiment, a gas truck arrived at the small village.

A loud hailer announced the truck’s arrival and scores of people made a beeline to the truck with whatever size and shape of gas canisters they could lay their hands on to stock up on fuel for cooking and heating.

Miozzo said the Iranian people have gone out of their way to make the Italians welcome.

“They are Muslims but on New Year’s Day they came to wish us Merry Christmas and gave us a card, thanking us for coming to help them. They also gave the women a red rose each as a token of their love and appreciation.

“This outpouring of love is something I will always treasure,” added the 50-year-old Miozzo.

The Italians were among the first rescue teams to arrive in Bam. They initially deployed a search and rescue team of five dogs and five handlers and two fire brigade teams, comprising 10 personnel.

Later, they set up the field hospital in Baravat, which has an operation theatre to handle minor medical procedures.

They also set up an encampment of 120 tents, each accommodating up to 10 people, to house survivors.

Besides this, they have set up an insulated 6m by 6m dome-shaped tent to enable Muslims to perform their daily prayers.

The field hospital would now be run by Iranian authorities with assistance from Mercy Malaysia personnel.

“The Iranian authorities have identified 23 basic health units that need assistance, one of which is this one in Baravat.

“Mercy volunteers are planning to serve here for three months. Each mission will be for three weeks or shorter, depending on things like how much leave volunteers will be able to secure,” he added. 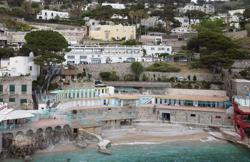