Kapt Khairul Hazrin Kamaruddin, 28, and Kapt Ashraff Che Hussin, 30, were on a routine training flight in a British Aerospace Hawk 108 training and attack aircraft from the Kuantan RMAF airbase before the mishap.

Four fishermen who were fishing in a smaller boat and a trawler about one nautical mile off the coastline were startled when they saw the aircraft plunging into the waters about 500m in front of them.

Rushing to the crash site, they managed to pull the two pilots onto their boats and took them to the marine police base before they were transferred to the hospital.

RMAF chief Jen Datuk Seri Abdullah Ahmad, who rushed to the scene of the crash, said at the Tengku Ampuan Afzan Hospital here that both pilots have died – one while on the way to the hospital and the other in the ward at 2.45pm.

Kapt Ashraff, who is married, is from Pengkalan Chepa, Kelantan, while Kapt Khairul Hazrin is from Batu Berendam, Malacca.

Efforts to salvage the wreckage of the aircraft would begin today.

Jen Abdullah announced the suspension of all training flights involving the Hawk aircraft and said a board of investigation had been set up to investigate the cause of the crash.

He said the fighter jet had taken off from the RMAF base here at 11.30am.

“The pilots were supposed to return to the airbase at 12.30pm. They last contacted the air control tower at 12.08pm before communication was cut off.

“A search and rescue mission was launched to find the aircraft.

“We also received a telephone call from a member of the public saying that the aircraft had crashed into the sea,” he added.

Fisherman Saadan Mohd Shah, 37, who was interviewed at the jetty, said it was fortunate that they did not move to another spot to place their fishing nets as it was at that place that the aircraft had crashed.

“Moments later, I heard a loud bang and saw an aircraft plunging into the sea in front of us. A few minutes later, we saw two people floating alongside the sinking aircraft.

“I immediately rowed our boat to the floating men and pulled them onto the boat,” he added.

Saadan said he and his friends pulled both the pilots onto the trawler and took off to the marine police jetty in Tanjong Api, not far from Pantai Sepat.

He said they also found two parachutes and handed them to the district police station.

Saadan said prior to the crash, he and his friends had seen the aircraft hovering over them and had ignored it because it was a normal sight.

“The next thing we knew there was a loud bang and we saw the aircraft had plunged into the sea with its tail just above the water.

“All these happened so fast, and we shuddered at the thought that we were supposed to move towards the same spot where the aircraft had landed,” he added. 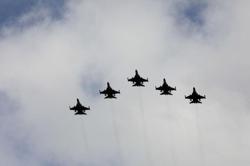